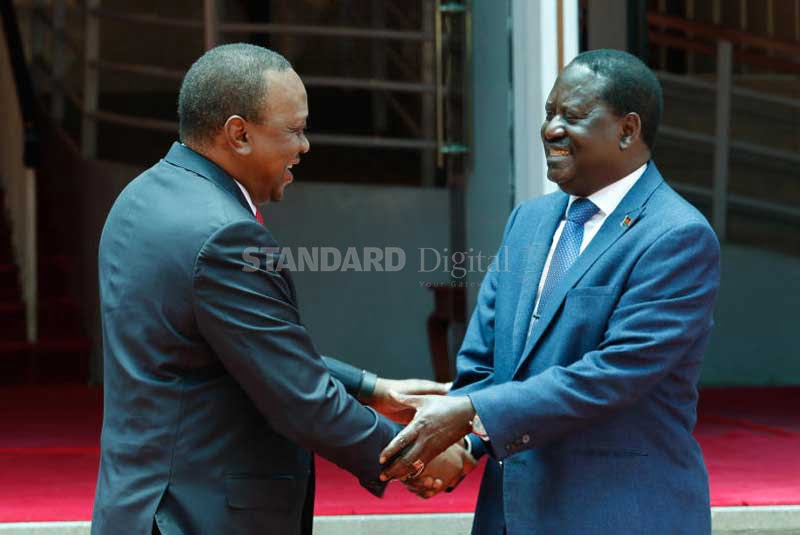 As always , I have been deeply reviewing the current vocal and viral political play in Kenya which, if you have been keen enough ,you will know it all started after the handshake between Raila and Uhuru . Now, I can tell you that one of the compensations to be given to Raila is power. The philosopher Michel Foucault describes power as a structural expression of “a complex strategic situation in a given setting” that requires both constraint and enablement; in the case of Kenya, power is evil and unjust-this sort of primitive exercise of power has historically been endemic to Kenya. This is the type of power that Uhuru doesn’t want to give up, Uhuru also wants his term extended as a principal but under a different title and or mandate.

Raila is already enjoying power, albeit unofficial, but the power promised to him is as a Principal Member of the Kenyan Executive. Now, to achieve the two personal ambitions of Uhuru and Raila , the Kenyan Constitution needs to be changed to allow more than the current two Executive Principals at the helm of the Kenyan Government and also extend Uhurus reign. For this change to take place, the country needs to go to a referendum-now here lies the problem and where things get strange and interesting.

Let me introduce you to two individuals, one is Edward Barneys-he coined the term Public Relations and also created ,built and sold Sigmund Freud and his ideas to the world (who was his uncle) and also the application of psychology in controlling masses in marketing, politics and power. The second is a living legend and a hero of our times, his name is Vladislav Surkov. He is one of President Putin’s advisers, he comes from the art world and has helped Putin maintain power for 15 years, but he has done it in a very new way. To us who have studied him: Surkov has imported ideas from theatrical world into the center of politics. His aim is always to undermine people’s perception so they never know what is really happening. Surkov has changed Russian politics into a bewildering, constantly changing piece of theatre.

Back to Kenya, the political elite knew two things, one, that Kenyans would negatively oppose any call for a referendum at the cost of close to 30 billion just to give Raila a seat. To solve this they created a grassroots movement called Punguza Mizigo to entice Kenyans towards a referendum, where we the sheep think we own this Punguza Mizigo movement. But the purpose of it is to sell to us a referendum and bring us to the ballot. Then they also create BBI, to hypernormalise us towards an idea of changing the constitutional stipulation on the number of Principal Executive positions and their titles.

Two, that after the handshake the Kenyan political opposition was dead because the official opposition was now working with the government. This leaves this position vacant for anyone to take up the mantle of the opposition. But the elites had to ensure that this ” opposition power vacuum” was not taken up by persons who they could not control, especially persons that could hamper, fight and destroy their grand plans for a referendum. So they slide in Team Tanganga and Kieleweke. This is basically a government that has its own Opposition Party, merely for the purpose of control of the masses all which are funded by the Kenyan Executive from our taxes.

This sums up the strange Kenyan political mood, where nothing makes any coherent sense. It makes it impossible for any opposition to emerge, because we cannot counter it with any coherent narrative of our own. This means that we as Kenyans become even more powerless, unable to challenge anything, because we are in a constant state of confusion. And just like what Surkov has done in Russia, Kenyan politics has turned into a bewildering, constantly changing piece of theatre.

I know most of the Kenyan politicians are also pawns in this game, they are all dimwits.

This master plan is privy only to a few individuals, the principals and their cronies.

The rest are out of the loop.