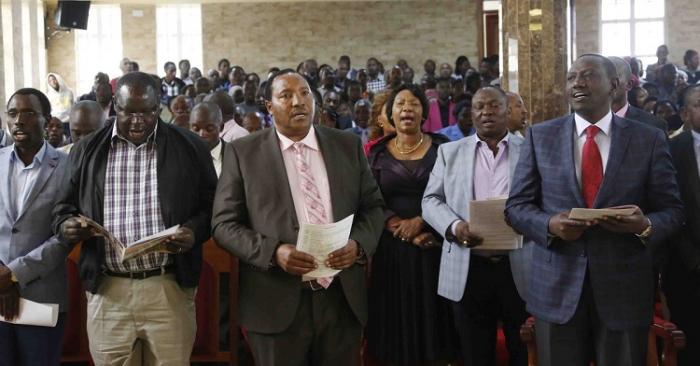 I have recently taken note of Kiambu Governor Ferdinand Waititu’s inherent stupidity and corrupt practices. Driving me towards him is the fact that both he and William Ruto seem to have an unhealthy relationship with the corrupt Kenyan clergy, who have become worse thieves than even Government officials themselves.

Waititu talks a big game but seems like he’s unable to depart from the ways of his Makanga/Dandora upbringing and conditioning. Please note that I have never at anyone instance said Kabogo was a better option. Infact I covered numerous scandals during his tenure as Governor and he was total trash.

I can only sympathize with Kiambu people who had to make a choice between 2 Devils. However for Nairobians, I have no sympathy because they had a pool of decent people to select from beginning with Miguna Miguna.

Any persons or groups working to scuttle William Ruto’s Presidential bid can be assured of my total cooperation. Because we cannot have someone politicking morning till evening, and trying to hoodwink us with bogus clergy. That every Sunday has become a day for politicking at the pulpit. That’s rubbish! Tumechoka na huyu Rumbwa!

Exposing corruption and incompetence at Thika Level 5 Hospital. My brother-in-law had an accident at Ruiru and upon being taken to Ruiru hospital, he was referred to Thika Level 5 hospital and was taken there by an ambulance.

Since that day, he has never been attended to, just lying there, writhing in pain with deep cut wounds and a broken leg, despite all the efforts to help him secure some treatment, all we meet are arrogant and corrupt medical staff who yesterday conned us some money out of desperation and told us to deposit the money to buy surgical equipments.

We sent Ksh.6,000 to a number 0741350585 belonging to one James Peter Ndung’u which after calling found that it was switched off and the guy told us to send more money for more equipments. That’s when we realized we had been duped. We waited the whole day but no medical attention, tried asking for the discharge of our patient but they refused. It’s quite painful to watch someone die while in the hands of careless medical facility that’s only interested in money rather than saving lives.

Today again, nothing has been done, the doctor came and gave us the same story that we need to buy some surgical stuff at Ksh.20,000 and gave us the number of the person to sell to us, which upon calling found to be mteja. This is daylight robbery, I thought one should first be treated in a public hospital and then billed later but here u need to bribe to be treated.

We want to transfer our patient so that he can get proper medical attention, he is getting worse by the day and nothing is being done just incompetent and corrupt devils in the name of doctors and nurses that should instead be sweeping the streets yet working here. We are tired.