Kindheartedness is a quality that is hard to find in today’s world especially when you go looking for it in Nairobi where almost everyone is known to be cold hearted and just after making money. A social media user this week shared his unusual experience in the streets of Nairobi after a complete stranger collected his phone on a busy road and gave it back to him.

“Ibra Cool” as he calls himself of Facebook accidentally dropped his phone in one of Nairobi’s busy roads and only realized it over an hour later. In frantic efforts to find his phone, he decided to call his line and that’s when Thomas Ochieng received his call and asked him to meet him at the Ruaraka Sports Ground to get his phone back. 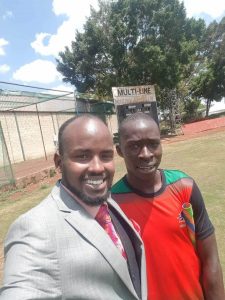 He rushed to Ruaraka Sports Ground where he met Thomas training with his friends and he handed over the phone to him without any conditions. He could not believe that Thomas had just returned his phone considering its cost yet didn’t ask for anything in return.

In a country where dishonesty comes in plenty, Thomas Ochieng is definitely one in a million for his unbelievable act of kindness and sincerity. 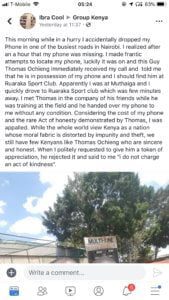 Caption: The story that has been doing rounds online.