ODM Party leader Raila Odinga has called on elected leader to desist from raising political temperatures while the country is still battling with COVID-19.

The former Prime Minister urged leaders to stand with the vulnerable in the society during this hard time as efforts to deal with the pandemic remain on course.

Odinga spoke during the Kenya Ni Yetu concert when he also said he is optimistic that Kenya will beat the virus.

“The COVID-19 pandemic offers our country the opportunity to be self-sufficient, there is a life beyond the pandemic, and we will get there,” he said.

The opposition chief together with COTU boss Francis Atwoli and Jubilee Vice Chairman David Murathe have been the busiest politicians traversing the country to craft 2022 coalitions.

Last week, the ODM leader came under serious attacks from DP William Ruto and his Tanga Tanga team. Odinga flip flopped over the looting at Kemsa.

Tanga tanga is currently pitching camp at the coast,  a region considered Odinga’s stronghold and the have continued their scathing attacks on the former PM. 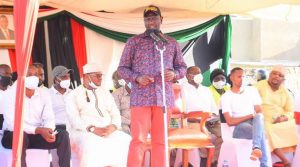 The DP is winning the people from Odinga, a self proclaimed ‘people’s president’ who has now been accused of ditching the people for the ‘system’ to succeed president Uhuru Kenyatta.

CS for health Mutahi Kagwe also pleaded with Kenyans to continue observing  the safety measures outlined to keep the virus at bay.

Kagwe was mentioned together with Health PS Susan Mochache in the investigations  into Kemsa theft.

He also flip flopped over the theft. Mutahi denied that funds were lost till he was mentioned.

Manjari told the joint Senate Health and Ad Hoc committee on Covid-19 that he was receiving numerous calls, short text messages and emails from Kagwe and Mochache to award tenders for the provision of various items.

Kenya Ni Yetu concert was organized by Media Owners Association for kenyan artists to perform and instill hope among Kenyans amid the COVID-19 pandemic.

Raila used it to calm Tanga tanga camp that is raiding coast with the same political tactic he uses, poking holes on the government.

This is after Raila had also flip flopped on the disputed revenue sharing formula that disadvantages the coastal counties.