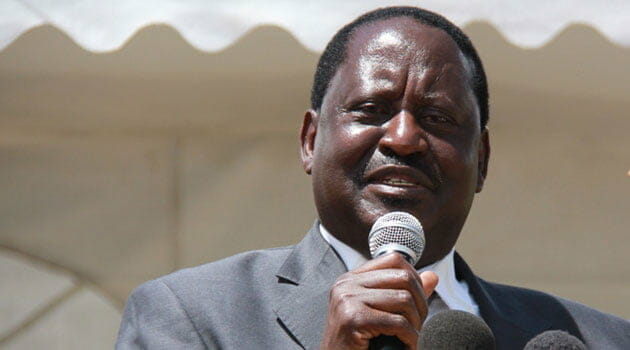 Opposition leader Raila Odinga has called for the resignation of officials at the Independent Electoral and Boundaries Commission (IEBC) as well as the Energy Cabinet Secretary Davis Chirchir who are under investigation in the unfolding multi-billion shilling ‘chicken’ scandal.

Odinga said the conviction of two officials of the UK based firm, Smith & Ouzman said to have bribed Kenyans, is enough evidence for the officials to be prosecuted.

Addressing journalists after attending a church service in Imara Daima on Saturday, the former Prime Minister dismissed the ongoing investigations as a waste of public resources and time.

“Those who have eaten chicken must step down…rarely do thieves confess, you should not keep on saying I am clean, go say it in the court of law!” he stated.

“Why keep on saying you are white as cotton?…Go to court, confess and then there can be reconciliation.”

“If your name has been mentioned in any corrupt incidence, own up and step down,” said Odinga. “Decency requires that you step down so that investigations can be carried out. What is happening today is shameful.”

He called on President Uhuru Kenyatta and his deputy William Ruto to push the mentioned public officers in stepping down.
“We are leading a society whose morals are very low… what example are we giving to our children?” he posed.” The bar must be raised is our country.”

On Friday, Energy Cabinet Secretary Davis Chirchir and former chief executive of the Kenya National Examinations Council (KNEC) Paul Wasanga were questioned at the Ethics and Anti Corruption over the scandal.

Chirchir called on members of the public to offer any information that may help clear his name in the chicken scandal.
The CS said he was not even aware of Trevy Oyombra, who is alleged to have been the link in offering bribes (chicken) between the UK firm and Kenyan officials.

“We will be happy to have this case properly concluded and I have encouraged anyone who may have evidence as regarding to the allegations which we have seen to basically come forward with that evidence so that we can close these issues,” he stated.

On Oyombra, he stated: “I do not know him”

Nicholas Smith and his father Christopher will serve about three years in jail for their involvement in the corruption scandal involving top managers of the then IIEC.