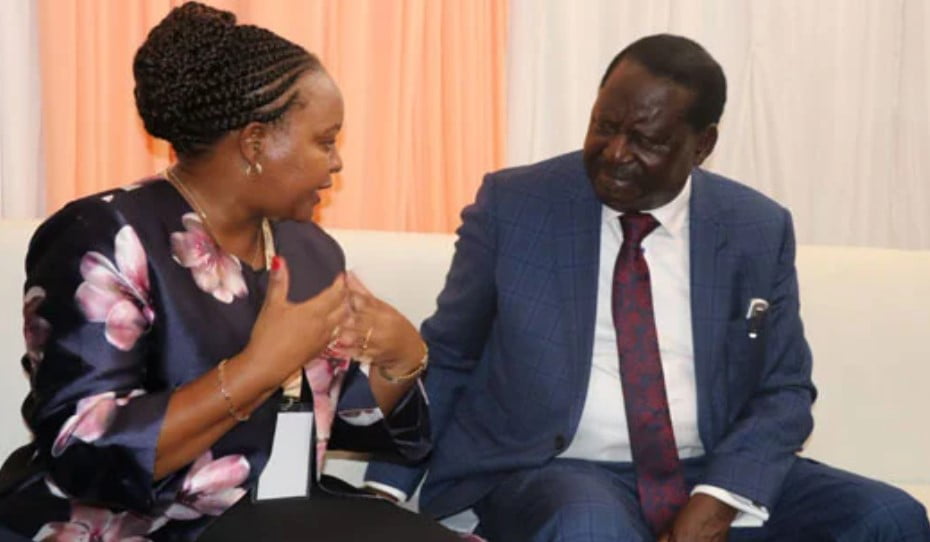 Former Prime Minister Raila Odinga has been forced to come out clean and issue a statement on his alleged night meeting with besieged Kirinyaga Governor Anne Waiguru whom the Nation reports to have helplessly rushed to the ODM Leader last Thursday to seek his support in fending off the impeachment threat in the Senate later this week.

In their Sunday publication, the paper claimed the two met on Thursday evening at an exclusive club in Karen, Nairobi, in efforts to help save her job which currently hangs by a thin thread following a successful impeachment motion by the Kirinyaga County Assembly last week and a failed attempt to block the move in court.

ICYMI: No Rest For The Wicked: EACC now after Waiguru over Sh50 million tender awarded to governor’s family company

The key agenda of the meeting also reportedly attended by a few aides from both sides, wrote the author, was whipping ODM, and other “friendly” senators to defeat the motion.

Quoting an unnamed source, the paper alleged that Waiguru walked in a few minutes to 7 pm accompanied by two aides, then Kiambu Governor James Nyoro and his Nyeri counterpart Mutahi Kahiga joined her before Raila and a few of his trusted MPs arrived for the meeting meant to boost her survival chances.

In his statement, however, Raila has refuted all these claims, insisting that no such meeting with Waiguru nor the other rumored governors took place.

In the post shared across his social media platforms, he has also denied the existence of any investigative Senate committee whose members from his party ODM he instructed to save Waiguru.

I am deeply concerned about the false story published in the Sunday Nation today. pic.twitter.com/fBw1OTVkch

According to the Nation, during the meeting, it was revealed that Waiguru had also reached out to her Jubilee Party and influential individuals in government for support this week.

The meeting apparently ended shortly after 9 p.m and also featured a former MCA in Nairobi County, only identified as Mr. Kamau.

The news outlet further noted that Waiguru reportedly told Raila that things were already promising from the Kieleweke wing of Jubilee in the Senate and all she needed was his help with the ODM side.

So what next for Waiguru?

On Friday, the Senate House Business Committee (SBC) recommended the formation of an 11-member special committee to substantiate the allegations levelled against Anne Waiguru during the impeachment proceedings by Members of the Kirinyaga County Assembly.

Majority Whip Irungu Kangata said the Senate will hold a Special Sitting on Monday to decide procedure on how to hear Waiguru’s case on Tuesday.

The Impeachment Procedure Act stipulates that the Senate must, within 10 days of receiving the Assembly’s resolution from its Speaker, convene and set up a special committee or sit as a committee of the whole House to determine whether or not the claims in the impeachment are substantiated.

Among the documents that were transmitted to the Senate are; the Kirinyaga County Assembly Hansard Report of the proceedings during the impeachment, evidence of the allegations used to support the impeachment motion and the list of the MCAs who voted and the respective charges.

With the committee route already secured, the challenge now is for the Kang’ata team to convince the plenary on Tuesday to affirm the committee’s decision. It is billed to be a tall order.

Mr Kang’ata dismissed as fake a list of 11 senators that has been circulating on social media as the individuals who will sit on the special committee, adding that he is ready to include Tangatanga senators on the team.