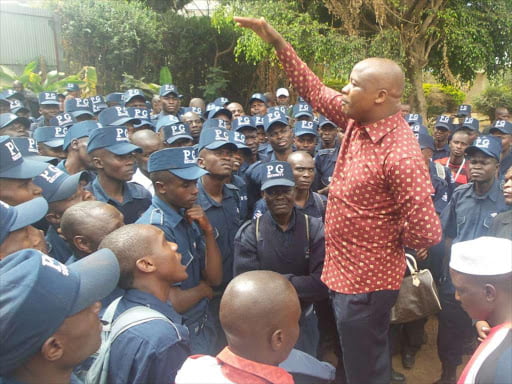 A security firm based in Kisumu has been accused of non-payment of staff.

“We have gone without salaries for more than three months. How is the company expecting us to live?”, wrote one of the guards anonymously.

Coronavirus pandemic has slowed down businesses and many firms are either downscaling their workforce or reducing salaries. However, some firms seem to be taking advantage of the situation.

Staff at Pride Kings Security Company think their firm is in the last category, ‘taking advantage of the situation’.

“The employment contract is between the guards and the company, hakuna pahali guard alijua atapelekwa kwa company A, B or C wakati ambapo aliandikwa. It is therefore very wrong to tie the guard’s salaries to the client’s payments. As it is if the clients delay in payment, the guards are not paid!!! Imagine! So if clients default for 6 months guards are to work for 6 months without pay? Ushenzi!!“, the source says.

The labour movement is dead, castrated by cartels led by Central Organisation of Trade Unions (COTU).

The security guards union, the Kenya National Private Security Workers Union (), is senile, it can’t support its members as required.

The source adds, ‘Atwoli who is supposed to be fighting for workers is engaging in useless dynasty politics. That man should die a slow and painful death for all the years workers have been mistreated under his watch. It is because of his poor performance and leadership skills that companies can mistreat workers in broad daylight.These guards have been going to work faithfully despite not being paid for all this time. People have families to feed na rent ya kulipa surely aki this is very wrong some of those guards are slowly sinking into depression. Expose this rogue company!”,