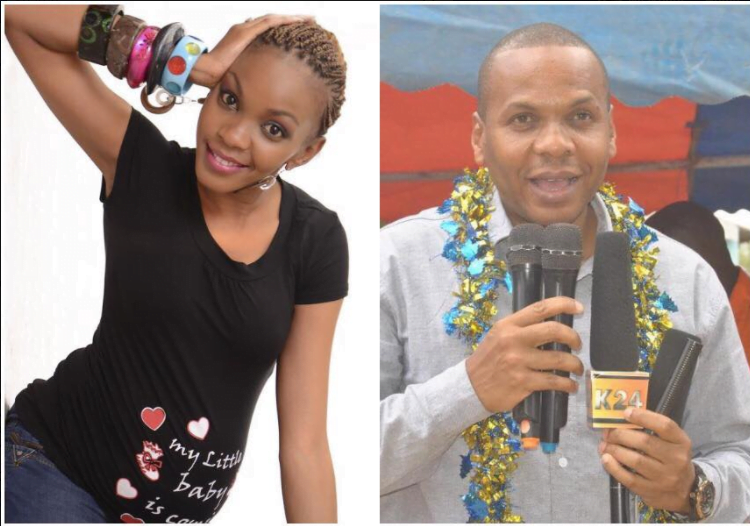 PHOTO: Danson Mungatana pictured with his Baby Mama Cecilia Mwangi. She refers to him as a “dead-beat” dad even after the nigga went bankrupt bankrolling her contrived standards.

It’s the social-pressure to impress basic bitches that’s currently fuelling all the corruption and irrational consumer-spending. This massive economic imbalance has seen men who occupy high offices, go to great lengths to conform with societal standards entrenched by older, rabid-feminists.

There is no way as a married man, you’ll take anything home as you concurrently pay for your family’s expenses, while still paying rent for your side-chic in Kileleshwa. That is investing in vanity.

Danson Mungatana is one fine example. Currently declared bankrupt, Mungatana had kept this super-model Cecilia Mwangi as his side-chic. He bought her a BMW and paid rent in one of those high-end estates. By then she was a Miss Kenya and later on she went to join the anti-Jigger campaign as its Ambassador. The former model was on the Malaya TV Network Ebru TV sometime in October, saying that Mungatana is a dead-beat dad.

That’s how thankless and heartless these bitches are. Solipsistic. The feminine imperative is one of profound sense of entitlement. They must be the “winners” out of every encounter with a man. And when you don’t sing to their tune, they trash-talk you on every platform that they can. But that was before Nyakundi.

Which is why even the older motherfuckers who support malaya side-chics across Nairobi, should join our movement. For instance when the price of maize-flour got so high and there was national outrage, government interventionist policies saw a uniform price for Unga, reduced to 90bob. Didn’t everyone across the board benefit? Or was the price lower for some?

Similarly, should we all resist the temptation to send these bitches money or pay for the ridiculous cost of their upkeep, won’t the price of pussy fall for everyone including them?

The sooner that men understand that cash for mama’s doesn’t help this economy, the better. They eat in fast-food restaurants owned by foreign investors. They buy imported hair, nails, cosmetics and jewellery. They drink imported shit like Moet, Bailey’s, and the likes. Yaani all the cash is repatriated to foreign countries.

So these same malaya’s are clamouring for big jobs, yet they still say that they can’t date broke nigga’s. Meaning that even the monied (stupid) old men who pay rent for these hoe’s, are diverting critical capital from the economy to fund the import-sector.

It’s the biggest oxymoron of our era. On one hand, malaya’s want top corporate jobs. On the other hand, they’re all over social-media, dishing out hate to men who can’t meet their contrived standards.

But if the cost of pussy falls, it will “benefit” everyone including the sponsors who never take anything home to their families.

And we will save our economy from extinction because all the corruption you see in national and County Governments is all diverted to bitches. Look at MCA’s who were removed from counties in the last election for instance; you’ll discover that many are broke by now. They used all their cash to pamper these bitches. Sasa wanaenda na rim.

Because this clamour for high allowances by elected officials is just to fund their vanity. If this obsession with consumerism, driven by malaya’s is curbed, the entire economy benefits. But when we have Governors investing in malaya’s instead of funding innovators and concept developers, then we are staring at a national crisis.