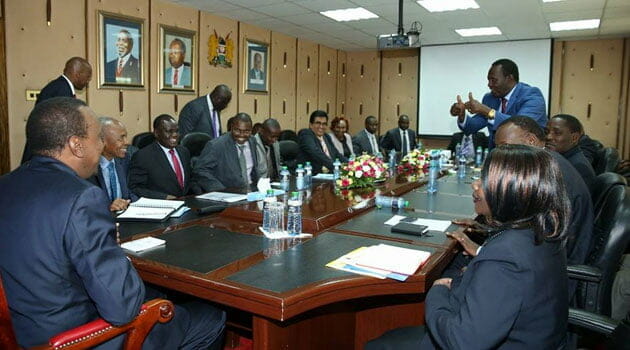 President Uhuru Kenyatta is expected to tour Meru County on Friday and Saturday.
During the two-day visit, he will issue 200,000 title deeds in different areas in the county.

He will be accompanied by Governor Peter Munya and his deputy Raphael Muriungi.

Other leaders are Kiraitu Murungi who is the Meru Senator, and area Members of Parliament.

The President will also launch a 180 Kilometre road and open several irrigation projects in the county.

His tour of Meru County will start at Marima Agricultural Institute where he will launch construction of another road.

Subsequently, he will proceed to Nkubu, Meru Town and Kariene where he will launch a fresh produce market.

In Meru Town, he will commission construction of another road to ease traffic in the area.

He is expected to make stopovers at Gakoromone Market where he will announce the construction of a bypass.

He will issue title deeds at Kirua before making his final stopover on Friday.

On Saturday the president will visit Mikinduri in Tigania east then fly to Mutuati in Igembe North where he will address the residents and issue title deeds.

Later, he will be at Maili Tatu before concluding his tour of Meru County in Maua where he will again issue title deeds.

His tour of Meru County comes amidst complaints by miraa farmers who are now fearing their market in Somalia will also be closed down.

Last Year, the UK banned miraa exports just like the Netherlands did before.

The Meru political leadership has also complained that the region has been discriminated in government appointments.