TNA nominated member of Laikipia County Assembly, Catherine Waruguru, has moved to dispel rumours flying around that she was nominated by President Uhuru Kenyatta’s party because of her beauty and killer figure.

This is after word went round that the 29-year Waruguru was nominated by Uhuru’s TNA because of her killer figure which could be turned into a party asset some day.

However, in an interview with a local paper, the sexy Waruguru dismissed those allegations saying those peddling them are driven by jealous and malice because she is more than qualified to be anything in this country and Uhuru’s TNA happened to notice first.

However, she admitted to being super sexy and hot, saying that even President Uhuru Kenyatta said she was beautiful when she visited him at State House with a group of other MCAs from her County.

“When I visited State House last year with a group of MCAs, Uhuru singled me out just before the end of the function and called me beautiful,” said Waruguru.

“Mrembo wa Laikipia hauna kitu ya kusema (Does the beauty from Laikipia have anything to say to me),” she continued saying those were the exact words Uhuru used in reference to her.

After the meeting, Waruguru revealed she chatted with Uhuru for several minutes, just the two of them, and even took a photo with him which she cherishes so much to date. 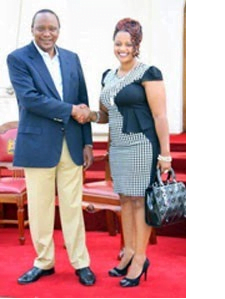 “After the function, we chatted for several minutes with Uhuru and I even took a photo with him. I cherish that moment every single day because it is not easy to be that close to the most powerful man in the land,” she said.