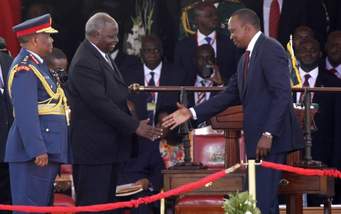 President Uhuru in the Crossroads after signing the Sugar deal
President Uhuru Kenyatta is a man under Siege . After signing the Sugar deal, That Sugar barons influenced by the way, he threatens to wipe out Jubilee gains in Western Kenya.
President Uhuru has been crisscrossing Western Kenya to lure them to Vote for him . This saw the appointment of Eugene Wamalwa , Kenneth Marende and others in a bid to show that he has not neglected the Luhyas .
Western Region is a great Voting Bloc and that is why Raila started panicking when Uhuru was making inroads .
But now Raila has something to bring down the Son of Jomo. The Kenya Uganda Sugar deal .
In a bid to normalize the situation, President Uhuru swiftly invited Western leaders to state house but many of them snubbed the meeting – Frantic calls were made but the Leaders knew people are watching and avoided .
So president Uhuru will have to choose between Western Voting Bloc and Pleasing Ugandans . By the way many farmers will suffer, this is not economics – It is common sense .