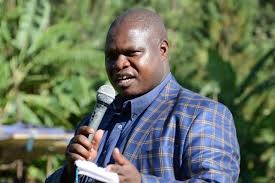 Kisii county ODM leadership reached a consensus on how top county party positions were to be shared between two warring camps. The two camps led by Kisii governor James Ongwae and those of Kisii senator Chris Obure and Deputy Governor Joash Maangi shared the party positions.
The accord was reached at after Maangi was pressed upon to upgrade his political status by bowing out from contesting the Bomachoge Chache branch chairmanship to area MP Simon Ogari. The contest between Ogari and Maangi was suspended after ODM headquarters and Kisii leaders pleaded with him to contest a county office and leave the branch seat to Ogari.
It was against this background that Obure was named the Kisii county ODM chairman with Kisii county speaker Kerosi Ondieki as his vice. Both are in the same political camp.
Ongwae took the secretary position with Maangi as the organising secretary. Kisii women representative Mary Otara who is allied to the Obure-Maangi axis was named deputy secretary with Nyatangi as the treasurer. MCA Risper Onguti was named the chairperson of the Women League with Changanya as the youth leader.