Kenya is a very hospitable country. For a few coins paid to immigration officials, we have accorded foreigners from regional war-torn countries the privilege of being Kenyan citizens. These are characters who burn their countries then come to floss in ours, pretending to be very smart individuals.

Somali’s for instance, burned their country then came to invest here in major companies like Nairobi Java House, 748 Aviation and many of the airlines operating out of Wilson Airport. We have Nigerians in the country, living in Umoja and Kayole, conning Kenyans of goodwill off their hard-earned money, and bribing police to get away with it.

South Sudanese clowns are also packed in this country, driving their left-handed vehicles and bribing senior Government officials in-order to invest in this country. Yet these South Sudanese mongrels have made it their core-business to arrest and jail Kenyans based in South Sudan, purely out of circumstantial evidence and xenophobia. 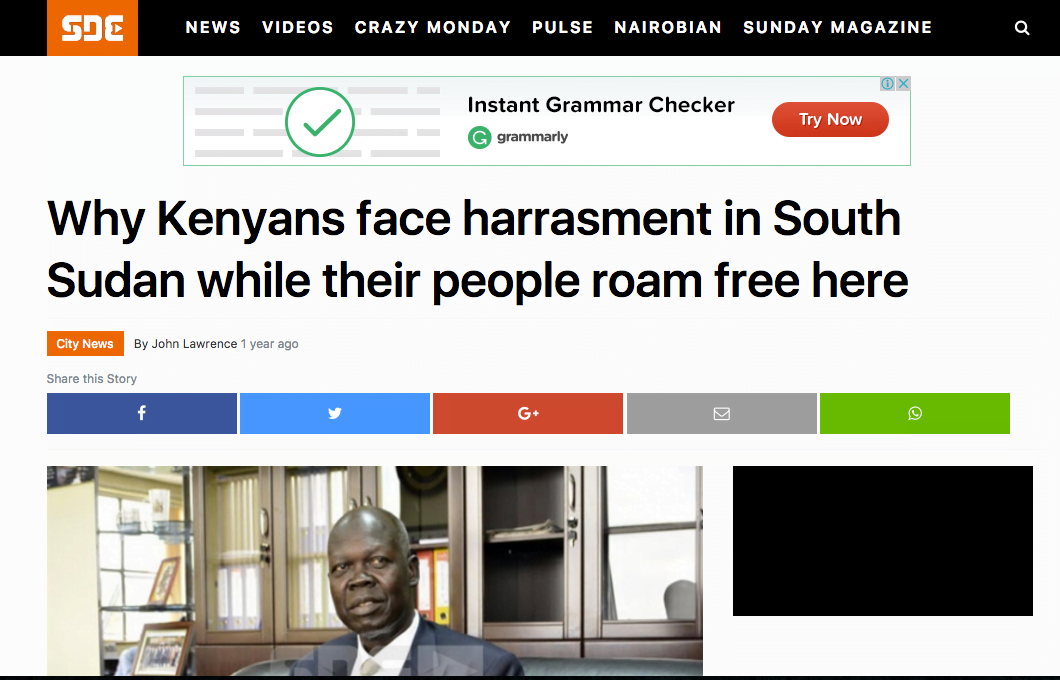 Why is Kenya acting as a dumping ground for countries which are only hostile to our citizens? It’s time we start dishing out similar contempt with equal measure. South Sudanese fuckers are roaming freely in Nairobi, yet they’re extremely hostile to Kenyans.

Since this Somali bimbo called Amina Mohammed has been unable to execute her mandate, it’s time for us Kenyans to think of another strategy. Because why are our brothers and sisters rotting in South Sudan hell-holes while appeals courts have found them guilty? Shouldn’t they be deported in the immediate? 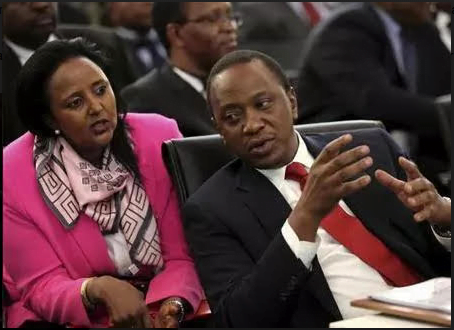 Pressuring the key beneficiaries of South Sudan’s kleptocratic system and identifying their illicit financial flows is likely a key source of leverage in pursuing for the release of Kenyans jailed in South Sudan. It is also appears the most appropriate of the range of enforcement measures available to us, since our Government has proven incapable of acting. We should also target key financial institutions which are Kenyan (or Kenyan based) which keep the South Sudanese economy afloat. These are Kenya Commercial Bank, Equity Bank and StanBic Bank.

South Sudan’s political and military leaders have bled their country dry to fuel extravagant lifestyles and fund a war that has claimed tens of thousands of lives and forced millions to flee their homes, says the Washington-based conflict investigative group, The Sentry, co-founded by actor George Clooney and human rights activist John Prendergast. According to Sentry, close relatives of President Salva Kiir and his former deputy turned bitter rival, Riek Machar, “reside in luxurious homes outside of South Sudan, including in one particular upscale neighbourhood in Nairobi, Kenya,” it says. That suburb is Lavington, where homes cost at least $1 million.

Since we Kenyans know these relatives and prime properties, shouldn’t we instead be targeting them instead of ourselves? Shouldn’t we forcefully eject South Sudanese because they have show nothing but contempt and xenophobia for Kenyans based in their shell of a country?

Kenya’s Dalbit Petroleum owned by controversial businessman Humphrey Kariuki, wired a reimbursement to the South Sudanese government to a general’s personal account, the report says. That money is thought to have gone toward paying for General Jok Riak’s luxury villa in Uganda – a property his $35,000 annual salary could never have afforded.

The banks implicated in the report are significant institutions. The $300,000-plus paid to Riak by Dalbit went into an account held with the Kenya Commercial Bank, East Africa’s oldest and largest commercial bank. Clearly our financial system is being used to sanitise the corrupt South Sudan regime.

Four Kenyans have in the last 2 years been spending their lives under deplorable conditions in South Sudan prisons after being sentenced to life imprisonment under unclear circumstances and bound justice system.

On Friday 29th of May 2015, four young Kenyan men are living and working in South Sudan namely; Boniface Chuma, Ravi Ghaghda, Antony Keya and Antony Mwadime were arbitrarily arrested by National Security in South Sudan from a company called Click Technologies. They were arbitrarily detained for nine months on one meal a day with no access to family or lawyers. 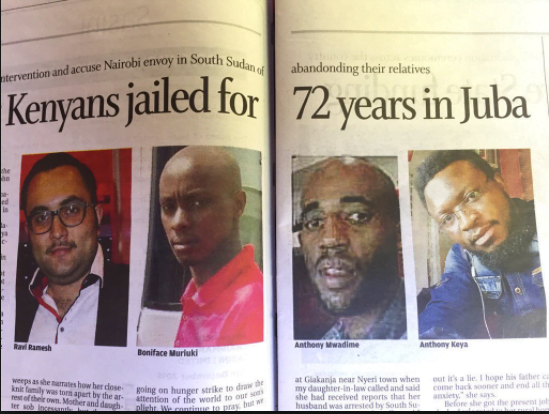 Caption: The Four Kenyans Jailed in Shell War torn South Sudan. When you see a South Sudanese roaming all over Kenya, this image should come into your mind

They were finally presented to Court on the 20th of February 2016 along with 12 south Sudanese for various charges which they did not commit; such as forgery, insult to the person of the president and misappropriation of funds among others. On 22nd February 2016, the accused persons were taken to court, tried and on 13th June 2016 were convicted and sentenced to life imprisonment. On 11th April 2017, the Court of Appeal quashed the convictions, ordered for retrial and further ordered that the 16 accused persons remain in custody for the period of a retrial.

The unfairness in court started from the very beginning when the judge set bail per person at $14 million USD. Their lawyer was forbidden to meet with his clients unless during the trial. Continuous intimidation to witnesses by National Security and exactly a month into the trial the lawyer, Kiir Chol was threatened at Gunpoint by National Security, whose written communication was snatched away from him and his clients’ and forced to drop the case.

While it is the obligation of any country to ensure safety it’s citizens both locally and abroad, Kenya’s foreign office and Uhuru being a colleague and a friend to SS President Kiir, has failed in its mandate. The failure to secure the release not fair judicial arrangements for the Kenyans rotting in the prisons is self-manifest of incompetence in the foreign office. Somalia recently secured the freedom more than 100 prisoners from Ethiopia after diplomacy talks why can’t Amina do the same. The abandonment of these Kenyans seems deliberate and a shame to the government for sacrificing its own citizens at the expense of personal interests while they should offer protection.

We hereby attach documents showing the entire background of the case, each court-ruling and the court of appeal judgment.