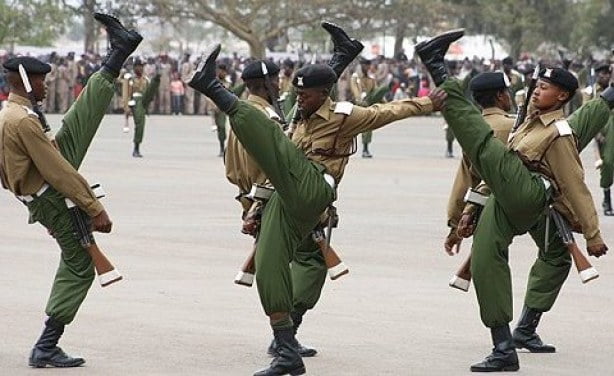 CAPTION: Administration Police Officers at a Passing Out Parade.

I am so much annoyed on how some Administration Police officers and their sub-county Commander at Khwisero Sub-County are harassing innocent wananchi. A case in point is on February 3rd, 2017, administration police officer by the name Koech and Mwaura based at Mwitseshe AP post arrested one Abisai Buliba for undisclosed offense. Mr. Abisai was detained in an un-gazzetted police cell for over 12 hours without being informed of the offense that he had committed. As a suspect, he had all the rights as a Kenyan to know the reason for the arrest in the language that he could understand.

As a concerned citizen, I wanted to know why he was arrested. I was told that the alleged suspect had misplaced a hummer (Nyundo) that belonged to one Christopher Amunga and because he had not returned it they had decided to detain him for all those hours. I wondered which law was guiding these officers. Do they know the difference between a civil case and a criminal caseCAP Are they aware of which cases they should intervene in and which ones should they not intervene?

After making this inquiry, I was asked by one Koech to give him Kshs. 3000 so that he can free the suspect. I declined and asked him to take the guy to the gazetted police station at Khwisero sub-county headquarters. The officer got so much annoyed and asked me to report to DIG APs.

Instead, I talked to the Sub-county commander- one Mr Achuka (phone number 0710370606) to talk to the officers so that if they feel the suspect had committed a criminal offense they should take him to a police station and lock him in until he is taken to court. To my surprise, the sub-county commander abused me that I am a fool, and he said I should take him anywhere I wish to. As a kenyan I only require services from civil servants, not taking them anywhere.

In spite of the above the suspect was taken to Khwisero police station where an officer at the report office declined to book the suspect, since she didn’t see the reason why the suspect was being brought to cell. This annoyed Koech (an AP Officer), who decided to book him in now for a different offense (creating disturbance). Even though this is an offense where one is supposed to be given a free bond, he was detained for another 12 hours, and only left Scot free after the wife looked for a bribe worthy kshs 2000 that was given to the police men as a transport cost. Raising Kshs. 2000 by this family is such an uphill task because they are the kind of people that usually have a single meal per day if lucky or none at all.

I find this disturbing because the Police who are supposed to protect the wananchi have become a security threat to them. They extort without care. All I want is the sub-county commander to apologize, and the above police officers to return the money they had taken from the above suspect. I need justice for one Abisai Buliba. We are willing to provide more evidence that can assist investigations.