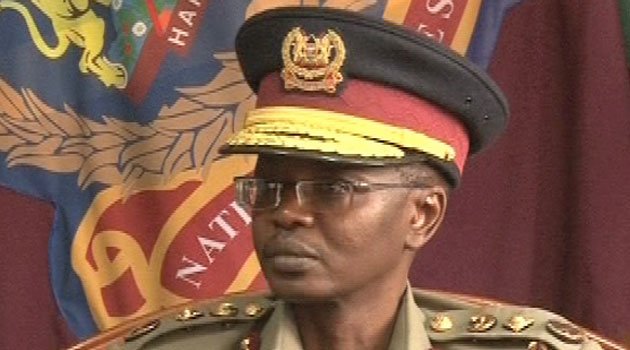 CAPTION: Inspector General Julius Boinnet. The Thika Police cells are a haven of sexual abuse, according to this letter sent to us. Could this practice be rife in other cells around the country?

A shocking letter that arrived in our inbox details the rotten Kenyan Police, who constantly top the bribery-indexes as the most rotten institution in the country.

Does Kenya have a curfew? You mean young people are not allowed to walk at night for fear of arrest?

Kikuyu’s continue getting the short-end of the stick even after claiming that “Uthamaki” Is theirs. They are probably the dumbest community in Kenya. Jubilee promised to improve police housing/welfare and rehabilitate cells, but it was all lies.

Read this horrible experience from young people, who might probably vote for JAP in the next General Elections.

I hope this finds you well. I would like to get help in getting fair justice on what the police officers in Thika did to me on 25th November. I was expected to be speaking at a youth overnight event at a church in Kabati. And since I reside in Nairobi I knew I would make it by 10pm when it begins.

On arriving I didn’t get to walk for long to Kabati stage I encountered a man who seemed to me like he would politely ask me for directions only for him to hold my hand and put it in handcuffs. I told him where I am going and that I couldn’t miss what’s happening in Kabati.

He could hear nothing of it. I was led to a bigger group of handcuffed people sitted on the floor awaiting the right quorum to begin matching to the station. I insisted to get a him to talk to my church host who was on phone but he avoided. I was put in a cell full of bhang smoke without me knowing why I was arrested in the first place.

I was physically and sexually harassed in the cell full of drug addicts.

The pastor and his colleague had to drive to come and get me out of that place but they were told the arresting officer has left and only the OCS will be able to release me in the morning. With my chest problem, staying in a cold and wet environment was really uncalled for.

What surprised me is that I didn’t get the OB number nor was my ID number requested for documentation. Meaning there is no proof that I was locked up. I have tried to call the station to give me the OB number for proof to the company that indeed I didn’t make it up for not making it to work on Saturday, it has been fruitless.

All they wanted from each in the innocent crowd was Ksh.3,000 for their freedom .
They picked every one including old grey haired sober man. How are we to feel safe if 9pm is too late to be termed a suspect?
I see the boys in blue as legalized criminals.

There is no ‘Utumishi Kwa Wote’ ideal when it comes to enforcing law and order when extortion and lack of freedom is routine. I came out troubled and traumatized because sadly the police on patrol seemed to be in good relations with those elements in the cell who already felt at home, supplying them with substance. I resolve to apply for Police Chaplain if not I will daily post ‘Luke 3:14‘ on their twitter handles until they change it into their slogan.

However you will help me I will appreciate it. Let them know that even well meaning Kenyans who are minding their business are not safe seeing them around. With such practices there really is no difference but the uniform with the outlaws.

Kenya will be better if all officers esteemed the advice from the Baptist in Luke 3:14. I am confident that God has cursed such lot that acts unethically, His peace is not with them and their children.