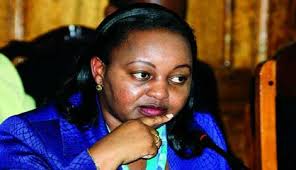 As you may all know, the National Youth Service scandal has blown up, threatening to tear the fabric that has kept the Jubilee Alliance together.

We still insist that President Uhuru Kenyatta had a hand in the scandal, as he kept defending Anne Waiguru from the get-go, even when empirical evidence to the effect that NYS was being looted to its deathbed by his friends came to the fore.

Recent revelations indicate that hatchet man of Uhuru Kenyatta’s brother Muhoho, JAP Vice Chairman and Former Gatanga MP David Murathe has now replaced Waiguru’s axis of corruption, and is now making all the fraudulent supplies to NYS, showing the general contempt that the Head of State has on the people of Kenya.

– even after appearing numerous times in the press and even before parliament … Something doesn’t ring true between Anne Waiguru’s affidavit and annexed Memos from Adan Harakhe, Ag. Senior Deputy Director General of the NYS

– On 3 June 2015, Harakhe is clearly informing Anne Waiguru for the first time about the supposed use of his  password – note he doesn’t refer to her supposed past advice to report his passwords misuse to DCI  – or to any prior memo/ letter/ or phone call to her

– why didn’t Anne Waiguru annex evidence of her advice to Harakhe in her affidavit to show that she actually did take the actions she describes in Paragraph 28 following what Harakhe “brought to her (my) attention”?  Most likely because no such conversation occurred hence there’s nothing, in writing, to use in her affidavit?

– Finally, assuming Harakhe’s 2 memos are legitimate (it is always possible they are forgeries – e.g. they are not on letterhead – I suppose that memos are usually on letterhead) they go towards establishing that Harakhe is the whistleblower and not Anne Waiguru.

For all we know, Anne Waiguru may very well have sent all the political characters named by Harakhe to him – seeing as in tribal and politicised Kenya – one sends region-political mates to persuade GK staff to be ‘reasonable’ all the time.