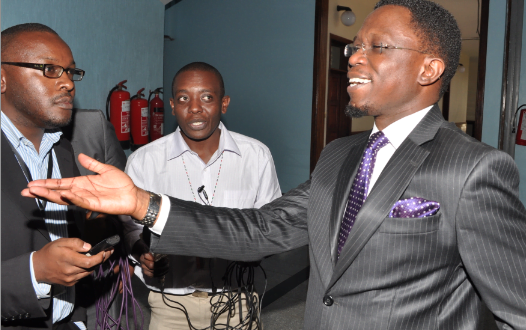 Cord Leader Raila Odinga on Wednesday challenged Parliament to deal firmly with corruption allegations against members of the Public Accounts Committee chaired by ODM secretary-general Ababu Namwamba.
While declaring that he does not want to be dragged into parliamentary affairs, Mr Odinga also turned the heat on key officials at the Office of the President who are alleged to have paid bribes to members of the House committee, demanding that they be investigated.
This came as Mr Namwamba appeared before the National Assembly’s Powers and Privileges Committee over the allegations, among them taking bribes, levelled against him. He spent two hours with the committee chaired by Kuresoi North MP Moses Cheboi.
Speaking at Orange House, the Nairobi headquarters of the Orange Democratic Movement, Mr Odinga said national agencies dealing with corruption should carry out proper investigations into the allegations of extortion, bribery and collusion among members of the powerful watchdog committee.
However, he was categorical that the investigating agencies must not just focus on the takers in the corruption allegations bedevilling one of Parliament’s most powerful committees, but also the givers.
BOGGED DOWN
Referring to the allegations that have bogged down the Public Accounts Committee, Mr Odinga said Parliament must assert itself on the matter and anti-corruption agencies should carry out proper investigations.
“If we talk about corruption there is a giver and there is a taker, why are we not talking about the giver who is the Executive in this case?” he said, likening the PAC case to people going after a dog that runs away with a bone dropped by the person who stole the meat.
“The thief is running away and you are concentrating on the dog,” he said.
Hansard records of a PAC meeting held earlier this month show that Mr Namwamba claimed Defence Principal Secretary Mutea Iringo had given Sh1.5 million to be shared out among six members of the committee to expunge his name from a report investigating confidential expenditure by the Office of the President.
Speaking after appearing before the Cheboi committee on Wednesday, Mr Namwamba demanded that the MPs who alleged that he had received money from the OP be made to declare it publicly before the Privileges Committee.
He said the first meeting with the committee investigating the conduct of the PAC had been used to address “preliminary issues”. The meeting lasted two hours.
“The normal order of things is that if you are supposed to respond to an allegation, then whoever is alleging should allege first and then the committee is able to frame whatever you’re supposed to respond to and then you come and respond,” said Mr Namwamba. He is expected to appear before the committee again this morning.
On Wednesday, Mr Odinga — who was secretly recorded by the ODM secretary-general and is likely to be called upon to appear before the Cheboi committee — said he had not received any invitations with regard to the issues that have rocked PAC and he did not want to interfere.
“Parliament should decisively deal with corruption issues facing it. I have never condoned corruption and will never do,” he said. “This issue must be dealt with holistically.”
Mr Odinga was speaking after receiving a report from the party’s disciplinary committee on investigations into the attack on former ODM executive director Magerer Langat.
QUESTIONING
Sources within Parliament have indicated that the Powers and Privileges Committee intends to summon the former Prime Minister for questioning on a private conversation between him and Mr Namwamba secretly taped by the Budalang’i MP in which an MP admitted having received cash to influence contents of a PAC report.
Mr Odinga was, however, reluctant to speak more on the issue, saying he did not want to interfere with issues of Parliament.
“I am not talking about PAC. I have not received any invitation to appear before Parliament. I want Parliament to deal with parliamentary issues, it’s for parliamentarians, please leave me out,” he said.
Although the House committee on Powers and Privileges is investigating the case, some MPs want the Ethics and Anti-Corruption Commission to take over the investigations.
Homa Bay Town MP Peter Kaluma has argued that Parliament cannot investigate itself and faulted House Speaker Justin Muturi’s decision to refer the matter to the committee.