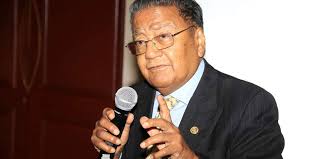 Nairobi Governor Mike Sonko has told businessman Dr Manu Chandaria to keep off a piece of land occupied by squatters in the Mukuru Kwa Njenga slums.

The Governor has instead asked Dr. Chandaria to seek for compensation from the national government as ordered by the court.

Speaking while distributing food to Muslim faithful from informal settlements across Nairobi at Nyayo National Stadium, Sonko said the Kenyan constitution allows squatters to claim ownership of land if they have lived on the land for more than 12 years.

He vowed to ensure that the squatters are given title deeds for the piece of land that has been at the centre of controversy between Dr. Chandaria and the locals.

“I want to warn Dr. Chandaria that l will not seat down and watch him frustrate the poor in the slums. If he wants to be compensated for the piece of land he should use the right channel,” Sonko said.

The County chief said he has reached out to President Uhuru Kenyatta over the issue and the President has subsequently instructed the Ministry of Lands to ensure the residents are given title deeds of the land.

“l want to thank the President because when we approached him he directed that no one should be evicted from the piece of land because it belongs to the public,” Sonko added.

The Governor also revealed that a section of those behind land grabbing in Nairobi are planning to approach him to stop opposing the eviction of Mukuru Kwa Njenga residents from the land claimed by Dr. Chandaria.

Sonko warned land grabbers who are targeting churches and Mosques, noting that the Nairobi City County Government will work closely with the national government to ensure that all grounds occupied by religious organizations are issued with title deeds.

The Governor also challenged the Nairobi City County Assembly to come up with stringent laws to protect city residents from greedy and merciless land grabbers who are out to kick them out from their land.

“We have to protect those who stay in slums and to do this we need firm laws,” he said.

Meanwhile, the Governor has insisted that besides initiating development projects in the city, he will keep sharing his riches with the poor in the society

“We must keep sharing with the less fortunate in the society and this is why l will keep doing this,” he said.