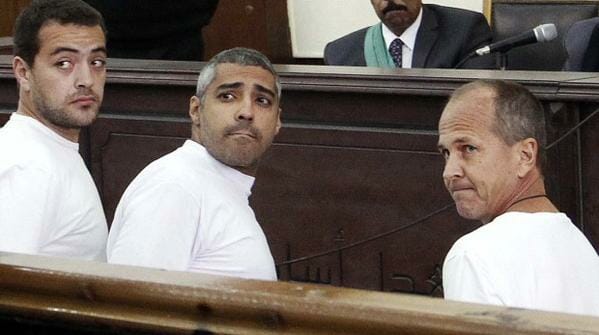 Peter Greste Qatari’s Al-Jazeera journalist-at-large has been languishing in jail for many months . Good news is that he has been set free but Al jazeera still demands the release of two of its journalists who are still languishing in jail. Peter was arrested and jailed for apparently supporting a terrorist regime during the time of Muslim brotherhood.

Muslim Brotherhood was very Inhuman and committed many crimes. The Muslim brotherhood, with a bloody history was declared a terrorist organization. Well, Obama said that it is moderate and we should have nothing to worry about. Eh ?

During the brief reign of the Brotherhood under Morsi, and under the literary encouragement of Greste, numerous Fatwas (Islamic religious rulings) were issued.

One Fatwa noted the Arab word for “sea” is masculine, therefore, if seawater comes into contact with a married woman’s pelvic area, she has literally committed adultery.

According to this Fatwa, she immediately becomes an “adulteress” and must be punished. The standard Sharia Law punishment for female adultery is to be buried upright, chest deep and stoned to death by anyone willing to chuck rocks at her head… and there’s never a shortage of willing participants.

“India Today” reported: “According to the report, the Fatwas issued by the Muslim Brotherhood regard women as strange creatures who are created solely for sex. They consider the voices of women, their looks and presence outside the walls of their homes an ‘offence’, suggesting women as a whole were offensive.”

• Women were ordered to “turn off air conditioners at home in the absence of their husbands as this could indicate to a neighbour that the woman is at home alone and any of them could commit adultery with her.”

Al-Jazeera (Arabic) supports all that is extremist Wahhabi Islam while Al-Jazeera (English) is heavily sanitised and is even broadcast through Australia’s ABC.

No surprises there because, along with Greste, the ABC also figured prominently in this year’s Walkley Awards.

Maybe Greste should also spend some time in jail here, considering what he was supporting through his employer, the Qatari owned and operated, Al-Jazeera.