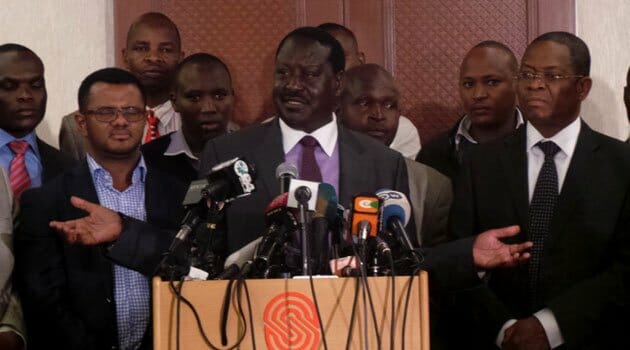 Cord leader Raila Odinga has named “persons of interest” amid a probe into how the Sh250 billion money was spent.

Raila, who has insisted Sh140 billion of the fund is missing, had given DPP Keriako Tobiko three days to name those behind the saga or he names them.

Others in the list he issued at Serena Hotel in Nairobi on Thursday were Central Bank chairman Jairus Nyaoga, Benard Ndung’u, John Birech, Moses Muthui and Patrick Kamau.

Raila also addressed international journalists regarding the Eurobond at the Foreign Correspondents’ Association of East Africa.

He said an international body should probe and take Rotich and his staff to court for “bad mismanagement” and “gross misappropriation” of the funds.

“We expect top Treasury officials to step aside and an international forensic firm appointed to investigate the Eurobond transactions,” he said, adding they should take responsibility.

The Opposition leader said JP Morgan and the Federal Reserve Bank of New York should also provide information on the Eurobond “lest they find themselves implicated”.

“We are not investigating murder or talking about evidence without reasonable doubt. Kenya officers are trying to manufacture projects funded in the past and pretend it was with Eurobond money,” he claimed

“$1 billion (Sh102billion) from Eurobond proceeds did not get to Kenya,” he also claimed.

Raila further said President Uhuru Kenyatta should declare the saga a national disaster and order an audit of the spending.

“This is theft like never seen before in our country. Eurobond money has been stolen in an elaborate scheme led by Kenyan government,” he said.

“Eurobond transfers to Central Bank Kenya accounts were not authentic”.

The EACC on Friday said it found no evidence that part of the Eurobond money was stolen by government officials.

But Raila said “Kenyans are not fools to be tossed around like tennis balls when it is clear the money never landed in the Central Bank account”.