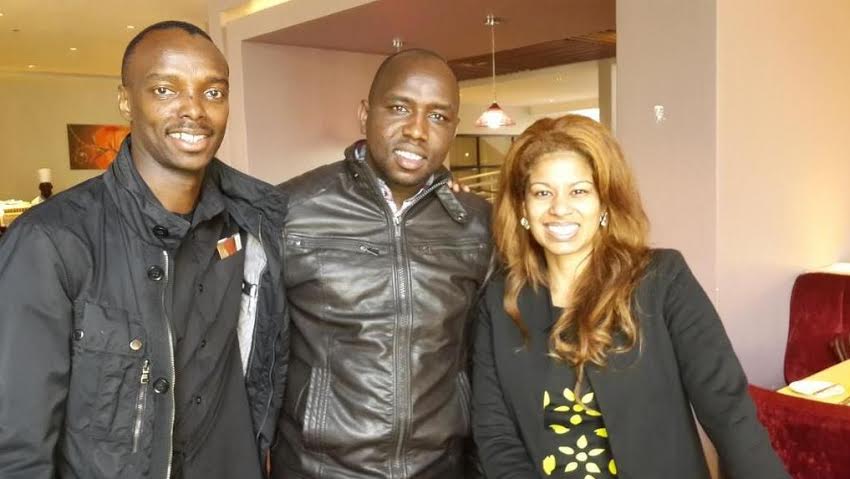 We will regularly update our kind readers and followers on various persons of interest, and try to connect the dots with corporate and grand corruption, threatening economic development and job creation for thousands of educated but jobless youth’s, who will form the bulk of masses that will show up in Uhuru Park in a few years, if jobs are not created for them. And going by the rate at which Uhuru and his St. Mary’s friends are looting the economy, the revolution might come sooner rather than later.

Today we profile Anthony Gichuru. Nicknamed “Flash” from his high-school days at the controversial St. Mary’s School that seems to have incubated the biggest crooks in Kenya today beginning with Uhuru Kenyatta, Tony’s primest acquisition to date has been Julie Gichuru, a news-anchor and motivational speaker, who has done wonders by cleaning up the image of the Gichuru empire, looted from Kenyan taxpayers and at one point being a darling of the media industry.

In the late 90’s and early 2000’s, Tony “Flash” Gichuru kept a low profile, working at Kenya Bus Services (KBS) as a General Manager in-charge of Metro Shuttle, even though he tried his hand at several ventures. His father, former Kenya Power and Lighting Company (KPLC) Managing Director Samuel Gichuru was a majority shareholder of the bus company, even though the Chairman is Karanja “KK” Kabage, who is a mainstay on Jeff Koinange’s bench, where he drumbeats for Uhuru, trying to cleanse the tainted image of Jubilee in exchange for tenders and jobs. What is now known to Kenyans as “Ass-Kissing Fuckery.”

Njoki Chege would be surprised to know that for the longest, Tony “Flash” drove a Subaru, even while dating her mentor Julie Gichuru, so we request the young writer to stop poisoning the minds of young girls by encouraging cross-generational sex in pursuit of material trappings like big cars, and to instead preach the gospel of hardwork, growth and spousal-support. There is no shortcut. Even if a girl slept with Chris Kirubi, there is no day he will handover his vehicle logbooks to her. It will simply be a night of temporary thrills.

As with any new ideas, the biggest handicap in corporate Nairobi is always capital, something that’s in plenty within the Gichuru structure. Tony incorporated One Communications Limited, a company offering Wi-Max services for corporate clients. The money to roll-out the firm was provided by his father, from the hidden stash of funds that Samuel Gichuru had stolen from the national power utilities company, looking for ways and means to launder it.

Tony Gichuru’s big break came in October 2008 when leading mobile telephone service provider Safaricom purchased 51% of OneCom, in a deal that earned “Flash” a whopping USD 2.6 Million (equivalent of Kshs. 260 Million). The CEO of OneCom at the time was Geoffrey Shimanyula, who due to Tony’s proximity to the powers that be, is currently a board-member of Brand Kenya, the moribund cash-cow that has not executed any sensible project to boost Kenya’s tourism or placement in the league of competitive nations. Safaricom’s then CEO Michael Joseph known in Nairobi as “Mr. 10%” is said to have been given his usual commission from the deal of Kshs. 26 Million.

Coincidentally, Julie Gichuru was also appointed on the same Brand Kenya Board by President Uhuru Kenyatta on the same day that Shimanyula was also appointed, indicating a link/pattern where Tony wants to exploit to probably siphon public funds under some dubious project. It will be remembered that Julie Gichuru was part of the Kenya House project where she was paid to cleanse the thuggery of over 500 million that was wasted during the 2012 Olympics in London. The Kenya House was meant to position Kenya as a hub for investment, but the only investors that the project seemed to acquire were Open Side Sports who defrauded the Sports Ministry off USD 800,000 or Kshs 80 Million equivalent, in a deal that involved Deputy President William Ruto, Sports Minister Hassan Wario, and the CEO of Sports Kenya Gabriel Komora.

Tony and Julie officially wed in December 2014, at a colorful event held at the posh Sovereign Suites in Limuru, attended by none other than Kenya’s Deputy President William Samoei Ruto who was the chief-guest. Sovereign Suites was was house owned by former intelligence chief and Goldenberg architect James Kanyotu, but has since been hijacked by Indian thief Kamlesh Pattni, who apparently forged documents to grab the prime property from the Kanyotu family, the spy died.

All corporate crooks and political scum in Nairobi had been invited to the grand wedding where liquor was overflowing like the broken banks of River Jordan with the couple sparing no expense.

Moving on, Blogger and comrade-in-arms Robert Alai set of one of the biggest legal occurrence after linking Tony Gichuru to the company that had intended to grab Langata Road Primary School. Antony ‘Tony’ Gichuru was listed as one of the owners of the Langata Road Primary School playground through Airport View Housing Company. In documents seen by Alai, Tony was listed with one Harbans Singh who is said to represent the interests of President Moi in many companies and Patrick Osero who represents Ruto in the dealings. Alai went ahead to reveal that Tony Gichuru had also grabbed 1,200 hectares of land in Ruai, meant for the construction of Nairobi County’s sewerage plant, together with Nairobi Governor Evans Kidero. Indeed, Julie Gichuru lost her job at Citizen TV after her sham 28th June 2015 TV-slot, where Kenyans protested on Twitter after her seemingly scripted interview with the Kidero, with users unanimously conceding that it was paid PR. Probably a kind favour in return for dirty deals being sent to Tony Gichuru’s way.

Robert Alai was arrested for linking TV anchor Julie Gichuru’s husband, Tony Gichuru, to land grabbing in Nairobi and detained at the CID headquarters as investigations into statements he made on the grabbing of the Lang’ata Road Primary School playground and another piece of land in Ruai continued.

But the most recent high-profile investments birthed by money stolen from Kenya Power by Samuel Gichuru is M-Cheza, where Julie Gichuru who has never stepped foot in a stadium, claimed that the betting company would discover and nurture sports talent in the country. To drive this deceptive propaganda, the Gichuru’s recruited prominent media personalities like Carol Radull to help move the company’s name to the masses. Others said to be part of the M-Cheza consortium are Kenya’s Hugh Heffner and promiscuous old man Chris Kirubi.

This last week, Tony Gichuru’s father pleaded guilty to money laundering and related charges by Jersey Island courts, from money paid to his fictitious firm Windward, and together with former Finance Minister Chris Okemo, forfeited over Kshs. 500 Million, but are still battling extradition to face charges. And inspite of the legal clusterfuckery the two have clogged Kenyans courts with in a bid to block their extradition, eventually it will happen and nobody will save them.

This here is a petition to companies, embassies, international bodies and initiatives that engage Julie Gichuru. For instance, it was an insult to Kenyans keen on the fight against graft for organisers to have Julie Gichuru MC and welcome visiting US President Barrack Obama, considering that she is a direct beneficiary of the Gichuru money that’s subject to a court-case and international arrest warrants. We hereby request all the aforementioned to cease henceforth, being roped into Tony Gichuru’s conniving ways of using his wife to cleanse the image of the family’s dirty empire, built with blood money. Many Kenyans died as a direct result of Samuel Gichuru’s corruption at Kenya Power, as his orders to drain hydroelectric power dams so as to give contracts to diesel power generators to companies affiliated to him, caused power rationing, killing thousands of babies and even adults in hospitals, whose equipment largely run on electric power.

No matter how much PR or cleansing Julie Gichuru can do for her husband, who is steadily & steadfastly following in his father’s footsteps, Kenyans will never forget what Samuel Gichuru did to our country.