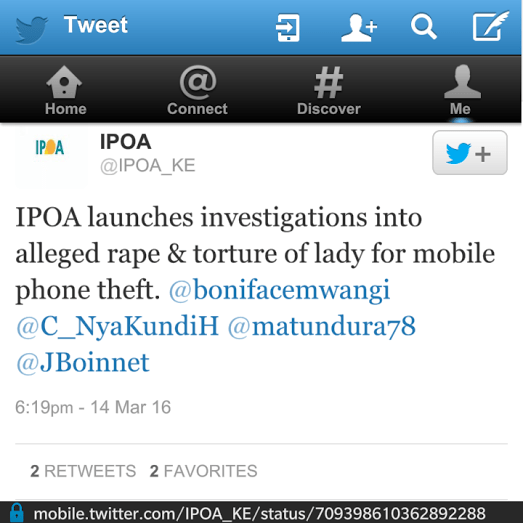 The Tunisian Revolution was triggered after a street-vendor doused himself in fire after unnecessary harassment from the local authorities, setting off a chain of events that altered the course of history.

Last week on Saturday, we received an email and audio recording from residents of South B regarding the death of Mercy Nanjala, a lady that was accused of stealing a telephone. We were almost there

As promised here, we will always run any news posted to us in good faith and for the sake of posterity.

Later that evening, South B residents engaged police in running battles, angered by the death of Mercy at the hands of the Administration Police officers manning the Mariguini Chiefs Camp.

What everyone has to understand that we are dealing with a rotten system from the core to the top. In future don’t direct your anger at innocent civilians but mobilise to form a critical mass protesting using peaceful means.

We have highlighted it severally that the Government would gladly spend Kshs. 50 Billion on fake CCTV camera’s, or buying armoured personnel carriers, spending whose main objective is to facilitate corruption in the form of inflated costs, kickbacks and commissions.

This money should have gone into improvement of police welfare, housing, salaries, risk allowances and benefits. It should have also gone into boosting training, so that Police can stop engaging is such henious acts of causing death.

From all accounts, this is a matter that has caused the country a lot of discomfort. Young people will not be treated like trash by this incompetent Government, that spends more time talking about Joho’s firearm and not such serious issues.

Dear CS Joseph Nkaissery, save such threats for your mother, and not us Kenyans who know the risks of Government excesses and kakistocracy. If you’re trying to impress Uhuru, who gets excited and rewards petty sycophancy, give us a break. Not at the expense of national security. You nee to drink some the maasai delicacy of goats blood, to get rid of that nasty KANU-era hangover you’re nursing.

Today, the Independent Police Oversight Authority has taken over the matter and will investigate circumstances surrounding the death of Mercy Nanjala. We hope it will be expedited as quickly and the matter seen to its logical conclusion.

The rest of us Kenyan youth need to remain vigilant. Let’s be our brothers keeper. All for one, and one for all.