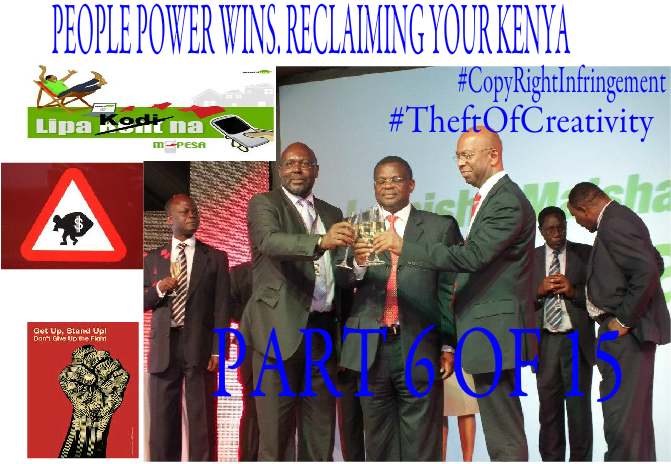 Competition amongst telecom companies is hot and getting hotter. There are two main telecom companies in Kenya a country of 30 Million  Kenyans. This is a relatively Big market. Many Kenyans have raised serious questions going by chats i’ve had with them.

Safaricom was originally intended to help Kenyans but that has not been the case. What about Safaricom and intellectual property ? If you ever meet the Safaricom bosses and ask them this Question, the silence will be deafening.

In 2012, An innovator filed a suit over money transfer Mpesa. The innovator going by the name Christopher Ondieki sued Safaricom saying he invented Safaricom’s Mpesa Upgraded Technology that allows users to transfer cash in US Dollars and Ksh to and Fro banks.

How did Mr Ondieki lose his great idea ? Mr Ondieki forwarded his proposal to Safaricom and was invited to demonstrate his invention but instead of finalizing the deal, Safaricom went ahead to implement it without his consent – Business Daily Africa Reported

That is just a tip of the gigantic iceberg. It is funny that these cases never get the attention of our ” Loyal ” and caring media. A close friend in the media industry tells me the Kenyan media protects their biggest customers in terms of advertising.

A Nairobi startup that develops mobile money for rental payments also accused Safaricom of stealing its idea after they proposed a partnership with the company.

Founder Steve Ngethe was shocked when he saw Safaricom Unveil Lipa Kodi product. Steve and Safaricom had discussed potential partnership their target being the real estate agents and developers. According to popular Tech Blog Humanipo, there were email conversations between Njoroge and Kennedy Luhambo of Safaricom business Development department. The cold fact was that Steve was in talks with Safaricom over forming a Joint Venture.

I the emails, Luhambo of Safaricom acknowledges that collaboration with Manyatta Rent would be mutually beneficial.

“We have been trying to get into the rent collection via M-PESA space for a while now. Having read about your venture, we would like to have further discussions with you to explore ways we can collaborate for mutual benefit,” Luhombo wrote to Njoroge.

Then hell broke lose. Luhambo through email requested Steve to send a proposal with promises that he would share it internally.

Steve was shocked when he heard about Lipa Kodi through the media. The only name that was changed was  the middle one . ” Lipa Rent TO Lipa Kodi. ” The idea resembled mine with only the name changed ” Lamented Steve.

Stealing Ideas from START-UPS has been perfected by Safaricom

Safaricom Maliza Storo is also a stolen Idea. The maliza storo service allows one to access airtime on credit for a fee up to 10% for each request.

A few months ago, Faulu Kenya filed a lawsuit in Kenyan high court seeking to halt Safaricom from operating Mshwari arguing that it was similar to its Kopa Chapaa. Kopa Chapaa service had been operational for one year before Mshwari was launched.

According to Faulu, they had pitched to Safaricom the idea of mobile money service that allows customers to save, borrow loans and earn a certain percentage in interest using mobile phones.

It is during this pitch that Faulu foolishly presented to Safaricom a prepared concept with full details documenting how the system was going to work. Faulu Kenya entered into a non- disclosure agreement that Safaricom faithfully disregarded.

This case was too hot that Safaricom had to issue this statement of their official site.

“While this matter is already in court and is therefore subject to sub judice rules, Safaricom Ltd seeks to clarify that M-Shwari is a proprietary product of Safaricom Limited which is the successful result of a 2-year product development process.

As you are aware, Safaricom Ltd has had a strong focus on Financial Inclusivity since 2007, when it launched M-Pesa. The commitment has been sustained through relevant enhancements informed by proactive research into user habits, dynamic customer needs and emerging trends, relating to the use of M-Pesa and other mobile finance solutions.

In developing M-Shwari, Safaricom Ltd and the Commercial Bank of Africa followed the due legal process as required by the Laws of Kenya.

As Kenya’s leading integrated communications company, Safaricom has consistently worked hard to conceptually develop innovative solutions for all Kenyans. As a result Safaricom has built an enviable intellectual property portfolio.

While the allegations are lamentable and unfortunate, Safaricom will seek to have the matter resolved through the right legal processes. We believe that this law suit is tainted with malice because it is founded on untrue allegations(…)”

Dear Kenyans, these accusations are shocking and more less similar. In all these cases, the dedicated innovators pitched their ideas as brilliant business proposals to Safaricom. Safaricom the accepts. accepted them. After a few months, you see the idea similar to yours ( Only the name changed ) being implemented. This is done with impunity without Safaricom seeking consent from the owner.

Going to court cannot really settle matters because we have judges with thin mindsets, fellas who dont know and value intellectual property. Kenyan media is silent. It is only bloggers that are trying to speak out and expose these evils.

Why did I pen this Blog-post ? I am just playing a role as a patriotic Kenyan. Maybe you have a great idea that may revolutionize the world, be keen…We have corporate predators out there . We may not be able to help Steve, Faulu and others whose ideas have been stolen but we have a role to play. The world changes every second and there is much more in the mobile industry. Only a few seconds before it is too late, share this and alert out people.