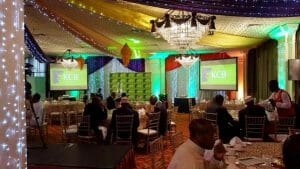 I am glad that Kenyans have started opening their eyes and the truth is now sinking In. There is something that is not getting attention of our political idiots because they think everything is going on Normally.  I told you that we need political will to fight what looks like efforts by Islam to dominate the world.

So,  Female Journalists were mistreated at Hilton Hotel ? And the Islamic Leaders may probably come out and say what happened  had nothing to do with Islam . It is very sad that  Female journalists, who were covering a Kenya Commercial Bank Islamic product launch at Hilton Hotel on Thursday, were forced to wear hijabs by the event’s organizers. Yes, You heard me !

According to photojournalist Diana Ngila, those who refused to follow the ” Backward Instructions ” Were turned away . This  was happening in their own country, their mother land. Yet, not even a single leader has come out to condemn this. They see it as a small matter…Err They are busy preaching unity between all  religions.

Is Kenya becoming an Islamic State ? The answer is Yes ! Why ? Here we go

During the brief reign of the Brotherhood under Morsi,  numerous Fatwas (Islamic religious rulings) were issued.

One Fatwa noted the Arab word for “sea” is masculine, therefore, if seawater comes into contact with a married woman’s pelvic area, she has literally committed adultery.

According to this Fatwa, she immediately becomes an “adulteress” and must be punished. The standard Sharia Law punishment for female adultery is to be buried upright, chest deep and stoned to death by anyone willing to chuck rocks at her head… and there’s never a shortage of willing participants.

“India Today” reported: “According to the report, the Fatwas issued by the Muslim Brotherhood regard women as strange creatures who are created solely for sex. They consider the voices of women, their looks and presence outside the walls of their homes an ‘offence’, suggesting women as a whole were offensive.”

• Women were ordered to “turn off air conditioners at home in the absence of their husbands as this could indicate to a neighbor that the woman is at home alone and any of them could commit adultery with her.”

Any connection with what happened in Kenya ? Connect the Dots .

“They told me to use a scarf I had around my neck to cover my head. I got inside and found men only. When I went to the podium to get a photo of the guests, I was asked to move.” Diana said.

” women who were allowed to stay, sat separately from their male colleagues and were forbidden from addressing speakers directly ” Diana Said

Diana said that their male colleagues allegedly asked questions on their behalf.

Idiots will never connect the Dots