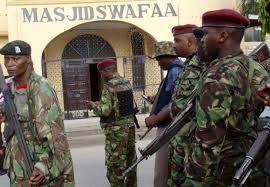 You might have come to this site to confirm where they are radicalized . Well, They are Mid-Eastern Buildings now called ” Centres of Worship ” and  our government has allowed them to go on with their radicalization. Kenyans should ask the hard questions ” How the Hell did we give such idiots the mandate to rule us ? ” What a pity. We have foolish leaders, that is a fact.  The Buildings where the Muslim Youth are Radicalized have tall minarets symbolic of what we call dominance. You got it clear …The Mosques !!

And who runs these Mosques ? Do you need another clue ? Let me try to think and tell you who the guys are … Some bearded bastards who have declared war on our country . They are always preaching anti- Kenyan messages without being tamed. Need their name …Oh, The Clerics !

Good. The last one, What do these clerics teach ? it’s something to do with a stone-age philosophy of violent hatred where those who don’t submit must lose certain parts of their bodies depending on the severity of the crime and where little girls can be married to old men but they must be genitally mutilated beforehand. Yaaay, that’s it! Shariah Law!

Our ” Clever ” Leaders have been claiming that Kenyans are joining the Al Shabaab in Somalia to be Radicalized. Lies !! They are usually radicalized before packing their bags and heading to Somalia. In fact they go to Somalia to receive training on how to annihilate Kenyans . I hope our foolish leaders will let this sink in.

Yet our foolish leaders and clueless media poseurs are preaching unity and urging us to treat those buildings with the same respect we treat churches. Have you ever seen a christian rushing out of a Sunday service wanting  to Kill people from other religions ? Most churches that I know, have never and have no plan of advocating for the abolition of other religions . Now do you have a  clue ?

The cold fact is that most mosques have become centers of discord, hatred and the eventual destruction of their hosts, and anyone else who disagrees with their ideologies . The so called ” Good Clerics ” Have not fought the radicalization issue .

These Clerics though . Not even Prophet Muhammad can tell between a Moderate and Radical Cleric . They use the same Koran, Same Mosques and Islam is Islam.

Join me as a Analyse Part 4.