I have always complained about Safaricom and third parties but it seems they are not doing anything about it . At one point in time, you might have lost 10 shillings, 20 shillings , 30 shillings or even more to third parties.

I remember Last year I had purchased 100 shillings airtime to call my girlfriend but lost 70 shillings to a third party after receiving a quote that I would have googled and copy pasted from the internet. After calling Safaricom, they told me I had subscribed and they could not help me refund the cash but deactivate the service. I just lost my 70 shillings and never called my girlfriend …She was mad but understood  after I spent my precious time explaining. Safaricom has messed up with her many times.

I am not the only one who is silently suffering. You may have lost your hard earned cash to a third party that sent you a love quote ..Etc . Back to my Village. An old grandma was forced to change her line because third parties were stealing from her. Tell me how she subscribed to these  love quotes yet she cant understand or interpret a word in English ! I helped her unsubscribe but she never got back her cash.

Third parties need to be regulated but Safaricom is not ready to do that because they pocket millions from these third parties. The suffering on our people has become too much. All this is done for profits, we have to say enough is enough. This must stop if not today, NOW. The fact that many Kenyans are loyal to them should not make them take us for granted, steal from us or make them ignore our cries.

Last time, I raised an issue about theft sponsored  by Safaricom but nothing was done. During the release of national exams, many of these scams involving third parties usually come up with promises like ” Send your Index number to this number and you’ll get your results immediately “.Though some people get their results, many people end up not getting the results and their hard earned bucks  never refunded.

Now there was this Third Party  scam which promised to tell you where your Kid has been selected to after the form one selection exercise. This is what the standard reported.

After the exercise is conducted, students will be able to access information regarding which school they have been admitted to by sending their index numbers to 20042. “Students who will have been selected into National Schools will be able to access the information immediately on the day the Ministry launches the exercise on Tuesday. Students who will have been admitted into County Schools will access this information on January 26,” said the ministry in a statement.
Well, I tried to inquire and this is what the fellas told me after sending my cousins index number to 20042 :
Index not found or wrong format , use 11 Digits only. MOE HELP LINE 0719457454 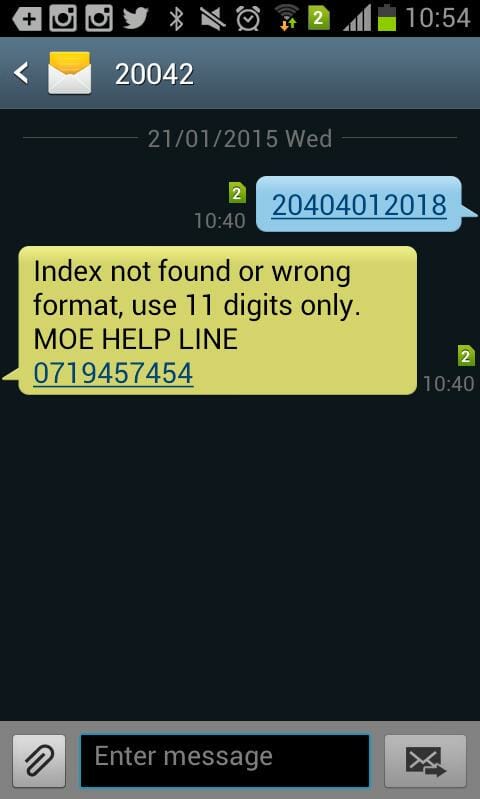 In fact I sent the correct index number. And of course my 25 Shillings  deducted there and then, Bila Huruma – To make it Kenyan. I  called the helpline thousands of times but  I was told they were busy .

The fact that they deducted my cash w/o telling  me what I asked for startles me .

So am I paying for ” their wrong format ? “ Remember these guys are supported by Safaricom . Who benefits ? 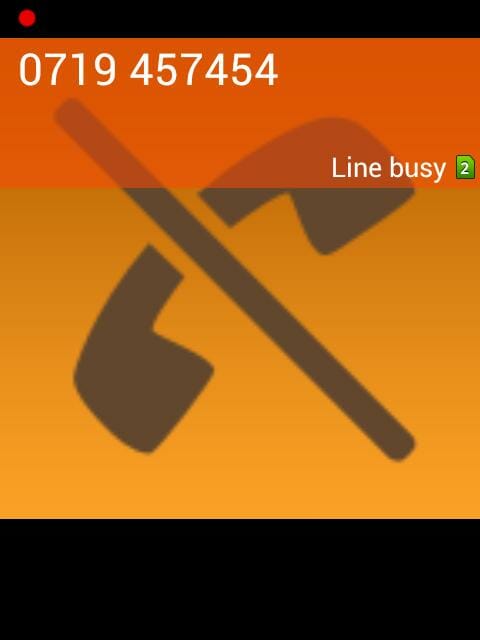 Assume this happened to 300,000 Kenyans . That will be 300,000 * 25  = 7,500,000. The propagators will smile to the bank and maybe give Safaricom and other mobile operators something small for helping them cone Kenyans.
Safaricom  must ensure that Kenyans are not conned by third parties. We must get value for our monies. It is wrong to allow such scams to steal from us. Something like getting a refund when you cant get what you ask for should be thought of.
The Cold fact is that Safaricom is not protecting their Customers from third parties that have stolen Billions . This is Part one of 15 Of my investigative series . I am  just trying to raise these issues because our ” Loyal ” and caring media has ignored them .
Please share this post because you are the only means of delivering this message. Tag leaders, media houses and everybody who should wake up and Stop this thirsty monopoly called Safaricom.
Would you like to get published on this Popular Blog? You can now email Cyprian Nyakundi any breaking news, Exposes, story ideas, human interest articles or interesting videos on: [email protected] Videos and pictures can be sent to +254 710 280 973 on WhatsApp, Signal and Telegram.