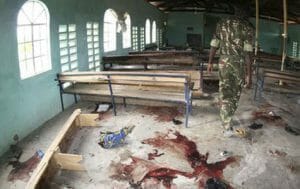 Apologists of radical Islam must be told off. It is quite time the world realized that the so called Radical clerics do not become clerics by moderation or in any way. World leaders are now agreeing to the reality that we must tell the apologists of Islam to shut the Hell up .
Islam is the religion of approximately 11.1 percent of the Kenyan population, or approximately 4.3 million people. The Kenyan coast is mostly populated by Muslims. Nairobi has several mosques and a notable Muslim population. The vast majority of Muslims in Kenya follow the Sunni Islam of Shafi school of jurisprudence. There are also sizeable populations of Shia and Ahmadi adherents. In large part, Shias are Ismailis descended from or influenced by oceanic traders from the Middle East and India. These Shia Muslims include the Dawoodi Bohra, who number some 6,000-8,000 in the country.
The Muslims especially those in Kenya have been complaining that the Jubilee government has not been treating them well, the fact is that they have many grievances. One Muslim once said that the government treats many Muslims like terrorists. What the hell ?
But it was shocking when guns, bullets and other terrorism related activities weapons were found in mosques. When asked, the clerics said that government was using this as a propaganda tool but then the question is why ?
Radical Islam has been a challenge but the Good Muslims have never told us why all these radical guys are associated with them. Whether RADICAL OR MODERATE…All these clerics use the same mosques and the same Koran. In short, Islam is Islam. At no time have we ever seen the good Muslims expose the Radical ones .

Sharia is the pure form of Islam, watered down versions are simply biding their time, they are prepared to wait for the global caliphate they were promised.
Under an Islamic caliphate those Muslims who do not accept the pure form of Islam are slaughtered, as has been the case in Iraq. As with Christianity, competing variations of the same faith are the real enemy, apostasy and atheism are ripe for conversion.
Catholicism may covet your mind but it won’t slaughter its brothers to achieve it. Christianity will lose to Islam and only determined political will can destroy it
The Kenyan  attacks should be a wake up call and a warning to all leaders all over the world and all over Kenya. We Do not need such headlines screaming at us
147  reported killed and among those 40 were beheaded . Deporting Radical clerics will work and dont ask the clerics to reform the radicalized youth because it is them who are entirely responsible for this Rot.
Now the media will try to tell you that this is an isolated case of some people  gone mad. Hell no !! How many people must die for you to treat this cases as Islamic Crimes ? The silence is deafening when this question is asked !!

We have identified Radical Clerics but the Government is waiting for people to die before they act . Er…They are busy jailing old grannies .

Ill be investigating without fear or favor the growth and spread of Radical Islam, people who finance and what we can do to detonate the timely bomb. Stay with me as we start the Journey