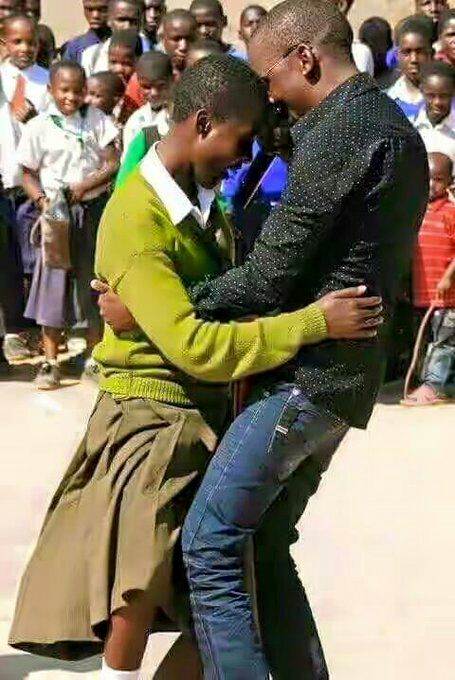 Paedophilia continues to be a scourge months after we first reported of a staffer at the Kenya Airports Authority who was bragging about having sexual intercourse with a Standard 6 pupil.

Another photo doing rounds this week is one of a Muranga Member of County Assembly (MCA) who is busy canoodling what looks like a Primary School girl, and grinding in a very sexually-provocative manner.The worst part is despite the photo going viral on whatsapp, no arrests have been made, yet the Inspector General of Police Joseph Boinnet claims to be serving the masses. What image does that picture portray, and what does it say about our law enforcement agencies who have to be hash-tagged into action?

Muranga is the County where MCA’s have been bribed to the roof so as to endorse and rubberstamp Governor Mwangi wa Iria’s grand corruption. Wa-Iria just like other corporate crooks thrives on bribing journalists and mounting billboards of himself with Uhuru and Ruto, claiming to work very hard.

And now, Mwangi wa Iria recently bribed EACC boss Halakhe Waqo with Kshs. 10 Million so that the Cushite can halt investigations into fraud at the Muranga County, one of the poorest counties, despite boasting as the source of top corporate “billionaires” who are technically thieves, like James Mwangi, Peter Munga and Chris Kirubi.

Mwangi wa Iria was busy lecturing Raila Odinga claiming that he was meddling in his county, yet the water from Aberdares is a national asset/natural resource which should be open to anyone.

Water CS Eugene Wamalwa yesterday held consultative meetings with old men from Muranga, where each was bribed with an envelope of Kshs. 10,000.00 and a further Kshs. 250 Million was promised as a soft-bribe so that the same old men can share it amongst themselves. A bunch of old men, using water calamities for personal gain. What a shame!

But why the hullabaloo about the Northern Collector Tunnel? Why is President Uhuru Kenyatta losing sleep over it, and why is former Prime Minister Raila Odinga giving him headaches?

The truth is that the water from the Northern Collector will be exclusively diverted to the Kenyatta family-owned Sukari Ranch, where Uhuru’s brother Muhoho Kenyatta is spearheading a gated-community similar to Tatu-City. Already, sewage facilities meant for Ruiru Township have been diverted to Sukari Ranch, and tarmacking of the road has already begun. The water is meant to be routed to the Gilgil water treatmeant plant operated by Nairobi Water and Sewerage Company, and then piped to Sukari Ranch.

Kikuyu’s have been subdued by the propaganda machinery and threatened if they dare go against the ways of Uhuru, which is why Mwangi wa Iria and Muranga MCA’s would rather accept the bribes from the National Government, than speak against the project. The murders of former Gatundu South MP and former Juja MP were subtle messages to prominent Kikuyu leaders that those who dare depart from the ways of the “muthamaki” will face a similar fate.

Plots at the Sukari City project are set to go on sale from next year, as roads inside the vast parcel of land will be cleared by then. Business journalists will be bribed frame that project as a sign of economic growth, just as they do by claiming that Malls are. Yet none will dare investigate where Eurobond money went, where the inflated SGR difference went and the likes. Shit business journalists like Wallace Kantai and Terryanne Chebet will say so.

What a coincidence that just as the President ascended into his seat, his family simulateneously launched multi-billion projects? It must be a coincidence definitely.

The truth is that the Northern Collector Tunnel must be stopped as it poses a threat to the livelihoods of citizens downstream. 5 counties are set to desertify if the project is implemented.