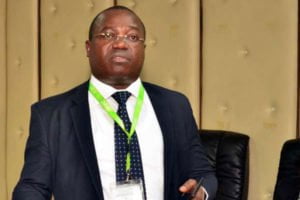 Former IEBC ICT Manager Chris Msando gestures at a press conference in 2017 before he was found dead on July 31, 2017

Since then, hell broke loose after former and current Independent Electoral and Boundaries Commission (IEBC) Commissioners started pointing fingers at each other while accusing the State operatives of eliminating one of them.

A former @IEBCKenya Commissioner, Roselyn Akombe has offered to give information to help in inquest of the cold blooded execution of Chris Msando. Shouldn’t investigative agencies take this on? WE should NOT let to pass such heinous murders and just move on.

Dr Roselyn Akombe, who flew this country out of fears for her life, has been cussing and calling out other commissioners for sitting on the unjustified cold-blooded murder of one of their own.

"No dead voters will rise on my watch"- Chris Msando.

Painful that instead, on this day 3 years ago, your own colleagues led you to the slaughter house.

We will find justice for you, no matter how long it takes #RIPChrisMsando https://t.co/QPmqpb3YjK

On Wednesday, July 29, Dr Akombe announced that she was ready to provide her testimony on the unsolved murder of her former colleague, Chris Msando.

The former commissioner who is exiled in the Burgerland, had reached out to the Law Society of Kenya (LSK) President Nelson Havi and asked that he represent her.

“On this anniversary of my colleague Msando’s murder, could you take this case up in the public’s interest? As I have said in the past, I am ready to testify,” she appeled.

So, what is Nelson Havi and the Law Society of Kenya doing or working on towards this?

We haven’t dismissed Dr Roselyn Akombe. Her decision to speak on this murder is a bold step towards its resolution. We however, doubt the commitment of the Government of Kenya in unraveling the murder. H E Raila Odinga and H E Musalia Mudavadi asked that FBI conducts the probe. https://t.co/vR7mXdqsPS

Dr Akombe exposed Chiloba, who served as IEBC CEO, had sent her a warning message after she expressed interest in testifying in the mysterious death of the former IEBC ICT Manager Chris Msando.

“Do not attempt to rewrite history. Our silence is not your license,” read the email.

On 29 July, I said I will testify at an independent judicial inquest into the murder of my colleague Chris.

It confirms my call for an inquiry. Kenyans deserve the truth. I owe it to you.#JusticeforChrisMsando pic.twitter.com/rHJbXZXfDy

In her response, Akombe revealed that it was ever more necessary for her to testify in the independent judicial inquest into the murder of Msando.

“It confirms my call for an inquiry. Kenyans deserve the truth. I owe it to you,” she captioned the screenshot.

Efforts by cnyakundi.com to reach Chiloba were futile as his cell phone was off by the time of publishing this story.

The former CEO Ezra Chiloba, or as many Kenyans had nicknamed him, ‘Chirober’ was fired from IEBC in October 2019 following a suspension he was subjected to in October 2017, shortly after the controversial general elections took place.

The dude has been media shy since his firing and has led a quite life out of the limelight. Chiloba just like other commissioners has preserved his comments on what transpired at the commission in the months leading to the 2017 general elections that were later nullified at the Supreme Court of Kenya by Chief Justice David Maraga.