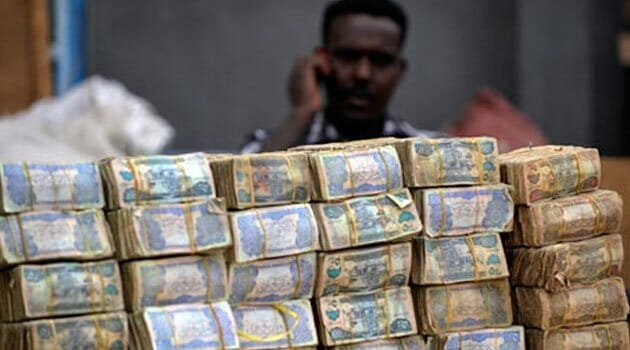 Adan’s brother lives in the United States where he runs a small business and sends money home to Somalia to pay school fees. Now new rules imposed this month to stop money laundering and terrorist financing mean all US transfers to Somalia are blocked.

“Why should someone stop my brother from helping my family?” Adan asked as he left a hawala — or money transfer office — empty handed after the payments he was desperately waiting for failed to come through.

Terrorist financiers undoubtedly use the hawala system but so too do millions of Somalis struggling to get by with the help of relatives abroad. The tough new bank restrictions do not discriminate and are severing what the government calls a “vital humanitarian lifeline” to Somalia where no formal banking system exists.

Every year diaspora Somalis send an estimated $1.3 billion (1.1 billion euros) home via the hawala system, a sum that dwarfs annual foreign aid to the impoverished Horn of Africa nation.

Hawalas are cheap and efficient to use, allowing money to be deposited in a foreign bank and instantly credited to recipients who have to provide only basic identity details matching those provided by the sender.

Besides the Horn of Africa, the ancient money transfer system based on trust and honour is also used across the Middle East and North Africa.

But banks in Britain and the United States have become increasingly reluctant to keep the hawala businesses as customers for fear of regulators who might prosecute them for financing terrorism and money laundering.

This month, the US-based bank that provides the majority of services to Somali money transfer companies said it would stop doing so after receiving a “consent order” from the US Treasury compelling it to increase oversight of clients’ businesses.

Aid groups said the decision by Merchants Bank of California would stop up to 80 percent of the $200 million sent home annually by relatives in the US.

As a result Somalis are “losing their only formal or transparent channel through which to send money,” a joint report by Adeso and Oxfam warned this week.

The crackdown is fuelling anger and prompting warnings from aid agencies that the restrictions could actually increase criminality, by driving transfers underground where they are hidden from scrutiny.

The charities warn that cutting services could actually boost criminal and terrorist gangs, including the Al-Qaeda-affiliated Shabaab, who carry out regular attacks inside Somalia and the region, including the 2013 massacre of 67 people in the upmarket Westgate mall in the Kenyan capital Nairobi.

“Informal business networks, supported by couriers carrying hundreds of thousands of dollars, would likely replace the current formal systems that are accountable to regulators and the communities they serve,” the report said.

“Families that depend on remittances would suffer, while the criminal networks that seek to exploit the system would benefit.”

Somali Prime Minister Omar Abdirashid Ali Sharmarke said the government is trying to prevent the closure of the main money transfer service from the US, warning the move would have an “astronomical impact” on the war-torn country’s economy.

“This decision comes at a time when nearly three quarters of a million Somalis are facing acute food insecurity, and we are likely to see that number rise if money transfer companies cannot remit funds,” said Ali.

Despite continuing war and humanitarian crises, Somalia is trying to rebuild.

Mother of six Safiyo Hassan survives on remittances from her brother-in-law, who fled to the US in 1993.

“We used to get monthly payments from the US to pay our children’s school fees, and to buy food,” said Hassan, who says that while she and her husband are unemployed, they have never sought an aid handout.

“Now we are not getting any money, so we ask the US and the government of Somalia to cooperate in lifting the ban,” she added sadly.

“We are now in a problem, may Allah help us.”

Last month the United Nations warned that more than 38,000 Somali children are at “high risk” of dying of starvation as the country grapples with drought and acute food insecurity.

But the US bank’s decision is only the latest blow to hawalas and the people who rely on them.

Banks in Britain and Australia are also seeking to stop providing services to Somali money transfer companies fearing they could fall foul of anti-terror laws.

For people like Adan, whose brother fled the civil war that broke out in 1991 and settled in the US state of Minnesota, survival not terrorism is the issue.

“We are using the money to survive, to build our children’s future,” said Adan “What are we meant to do?”