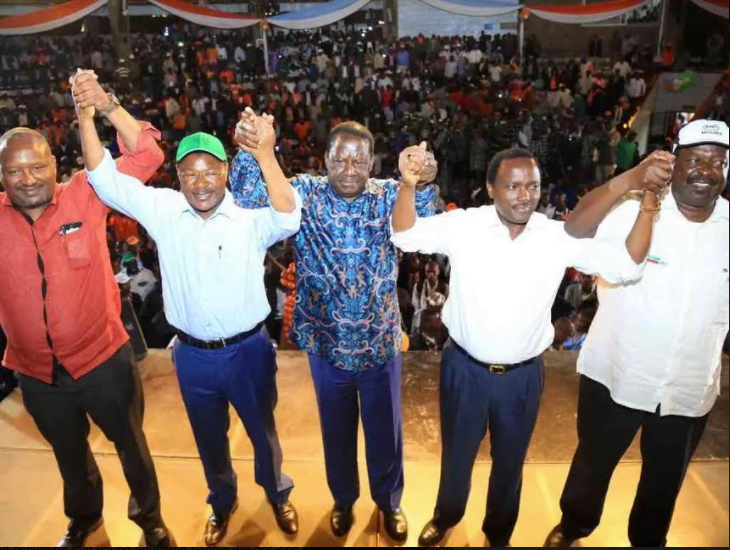 The alcoholic President Uhuru Kenyatta is banking on the simple fact that a Raila candidacy will automatically drive his strongholds to vote for him, together with his running-mate and resident-kleptomaniac William Ruto.

The two jokers have not done anything for their strongholds, save for launching air, addressing churches during harambee’s and assuming that young educated people will get jobs through divine intervention.

They lied to us about giving Kenya a modern train, yet they have spend a quarter of the country’s GDP on colonial wagons, with the cost said to be inflated 4 times over the original price, with the difference being embezzled by Uhuru, who conspicuously insisted on single-sourcing. 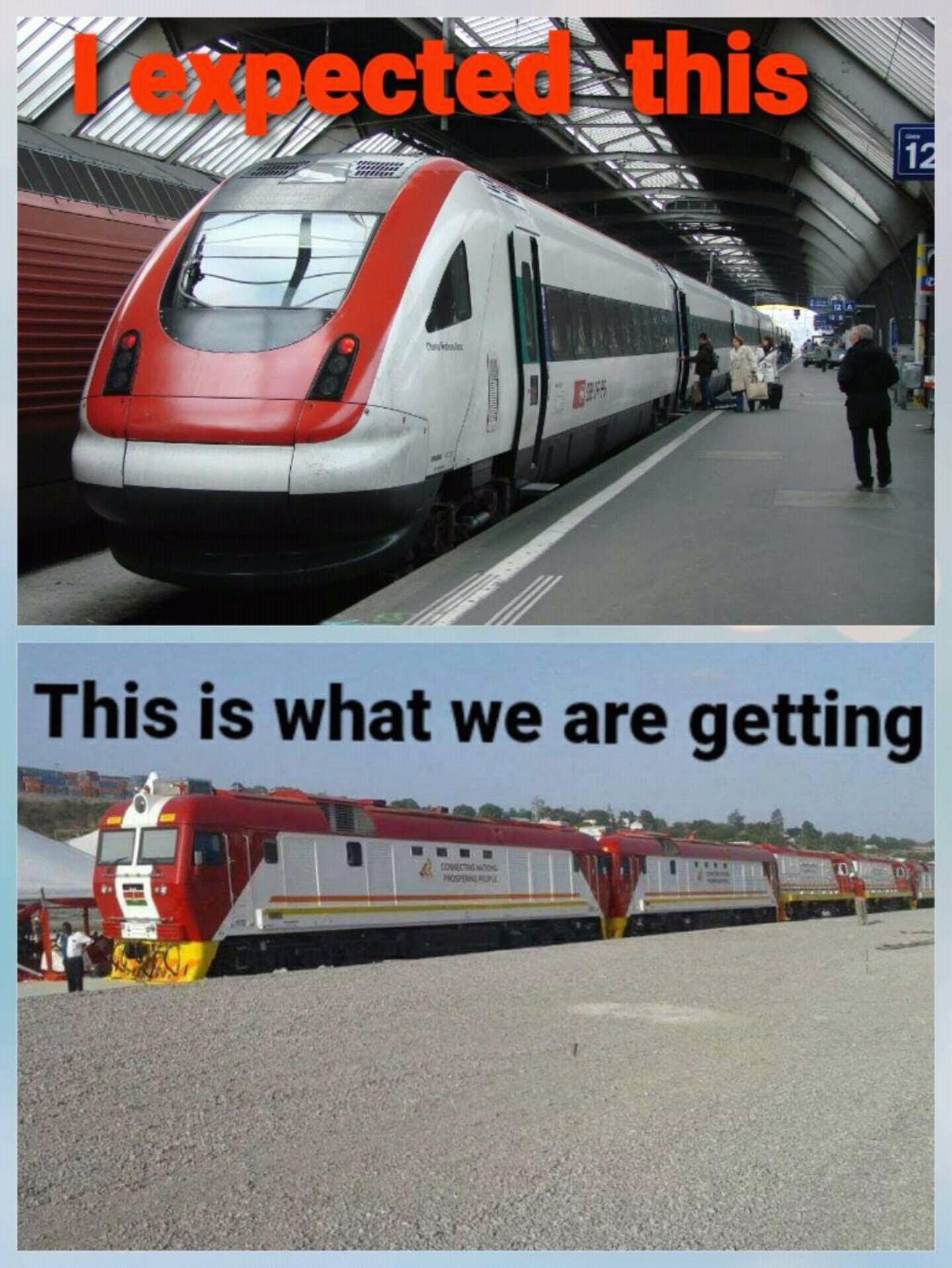 President Uhuru Kenyatta lied about building 5 stadiums, bidding for the Africa Cup of Nations 2017, lobbying the FIA for a return of the Safari Rally and tax concessions to enable corporates to pump money in sports sponsorships. His only achievement was paying for Harambee Stars to go watch the WorldCup in Brazil as spectators, not participants. He’s the only dumb President who has ever done that in the tournament’s history.

We have consistently told Raila Odinga to get rid of tribal fuckers like James Orengo, Anyang Nyongo, Johnstone Muthama, George Aladwa, Reuben Ndolo and the likes, but the old man doesn’t want to listen.

We have pleaded with Raila to assemble a visionary team of young people who will speak to the estimated 2 Million undecided voters who feel genuinely betrayed by Uhuru’s false promises, but he seems to think that we are bullshitting.

We have constantly told Raila to stop mistreating his social-media team, by paying them peanuts or expecting them to work pro-bono, but the ODM leader together with his foot-soldiers like Junet Muhammed want bloggers to volunteer now and get paid in kind, should he win the presidency. Nonsense!

We have asked Raila to include more Kikuyu’s in his advisory panel, especially the youth and not just Mutahi Ngunyi, who will give other youth’s confidence that their agenda will be critical in his Government. So far, we are just seeing Raila surrounded by old-guard wankers, whose hobby is spewing anti-Kikuyu 41 vs 1 sentiment.

Again Raila should stop isolating and balkanising an entire vote-rich region, because of his personal beef with the Kenyatta Family, due to historical-injustices between Jomo and Jaramogi. Get over that shit Mr. Odinga, there’s an election to be won here. Ain’t nobody got time for petty.

All I know is if Raila wants the best young brains in the country working for him, he has to pay well so that they can be able to leave whatever they’re doing, and concentrate on delivering a product that will make him marketable to the country. There are no freebies this time round. He also has to be clear with them, and negotiate for post-election jobs in the Government, should he win.

Other than the rural Kikuyu’s who have been conditioned to defend “Uthamaki” by Kameme FM owned by the Kenyatta Family, the rest of the progressive-urban Kikuyu’s don’t feel Uhuru’s vybe. They know very well that a second term for that pathological-liar will see Kenya go to the dogs and join the ranks of Congo or Chad.

Again, we ask the children of Raila who may read this, to inform their father to stop immediately, any further depicting of Kikuyu’s as “them” . Insanity is repeating the same thing over and over again, while expecting different results.

Kikuyu’s have been screwed by the Kenyatta’s with lies and false promises contained in the Jubilee manifesto, that they seem to have had enough. Which is the reason why we have attached a few screenshots, so that idiots like Johnstone Muthama and James Orengo who forever like taunting Kikuyu’s, can look for another hobby. 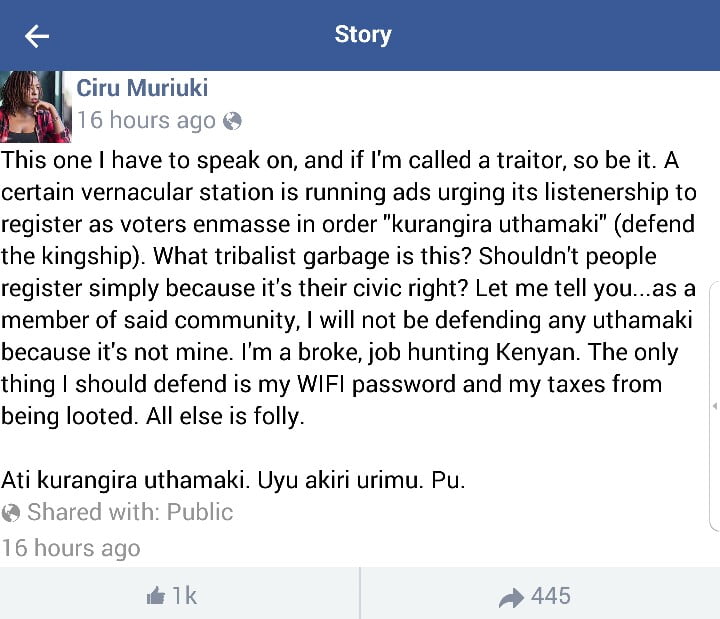 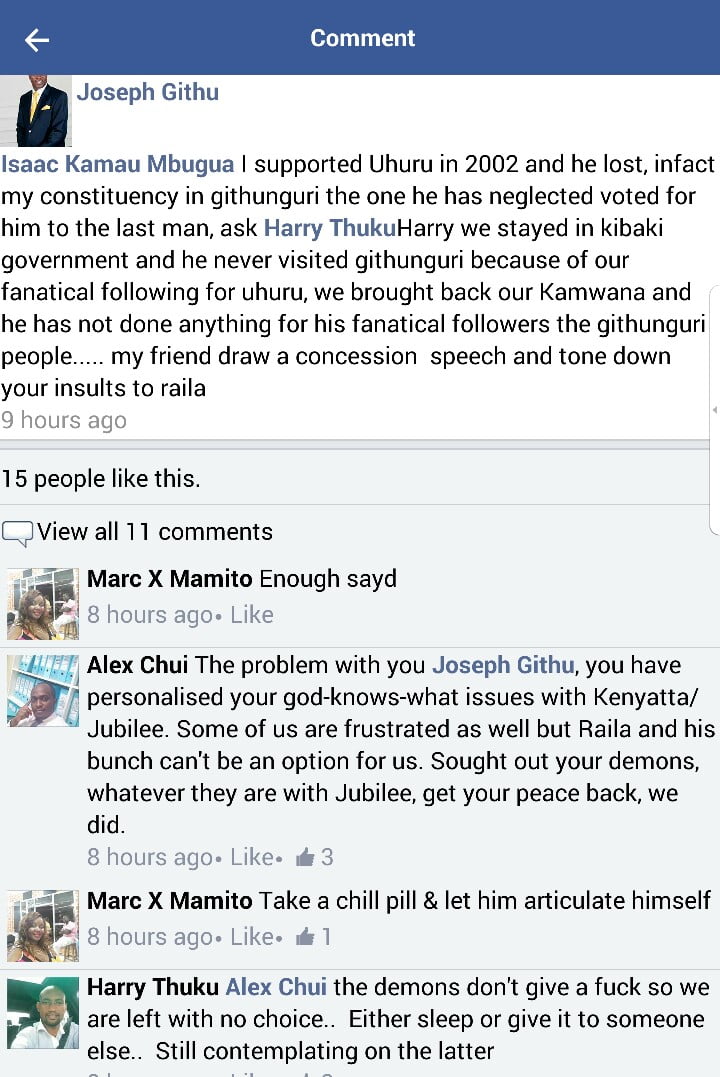