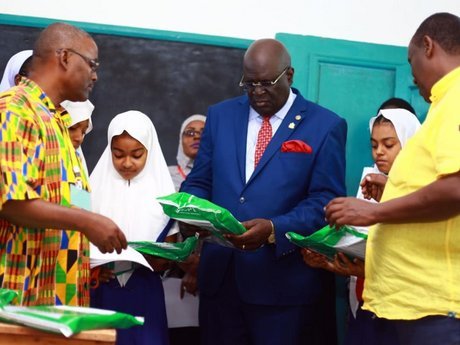 2022 will be a hard year for all of us with the looming elections. It will be harder for the kids who are always the grass where two bulls fight!

Any nation that does not care about its children’s education is like a cowherd opening the gate to his Kraal to a pride of hungry lions. They will not spare any cow or bull and after that they will attack the owner of the Kraal and his entire household.

The greatest tragedy about us is that we love to give and take whole raw lies or half truths. We bury our heads in the sand like the Ostrich and wait for the storm to go. The storm might not respect our trick and it might carry us with it.

I have been observing this very important change that is taking place in our country. The change in the Education curriculum from the 8-4-4 currently blamed rightly and wrongly for all the ills in this country to the new bride COMPETENCE BASED CURRICULUM – CBC seen as the magic solution to all the ills we have. Most of us see the CBC as the new broom that sweeps clean but a few of us see it as the beautiful girl who smells in the mouth or the poisoned chalice.

Well, since the mighty have their way those opposing the CBC should look at where it has landed one Wilson Sossion and shut up their mouths. Sossion was powerful till his fat colleagues from Mlima decided to fill their stomachs and ignore their professional ethics. They became a formidable scheming force fronting one of the Unions stalwarts to temporarily hold guard before the whole union comes down like a house of cards.

If you allow me to borrow from Ayi Kwei Armah’s” The Beautiful Ones are Not Yet Born” I will say of the CBC that it is the same old bus and that only the colour of the paint has changed. Ask the teachers teaching Grades 1-3 who are also teaching standard 4-8 and will tell you that nothing much has changed except for a few practicals where the kid, who has never swept his classroom is expected to go and sweep Gikomba market. A kid who has no bed is supposed to make his own bed at home. Photos taken by parents and sent to the class teacher who has no room of their own let a lone a cabinet to file the many photos.

The curriculum has brought more confusion to the kid than good. One kid asked me, “Shosh how come Noah was inside the fish for three days but did not die for lack of air to breath? And was Elisha a good man to have prayed for bears, what are bears Shosh? to kill little boys for making fun of his bald head?”

I dare say that until Africans learn to trust themselves and their brains and stop copying from other people, we shall remain a dumping ground even for curricular that have failed elsewhere. That is what it means to be slaves for ever. Mwiba wa kujichoma.

So we accept the CBC like the sheep in Peter Abraham’s ” Mine Boy” which do not know where to run to when the lion roars.

In this article:2022 elections, CBC, Comptency Based Curriculum, Sossion