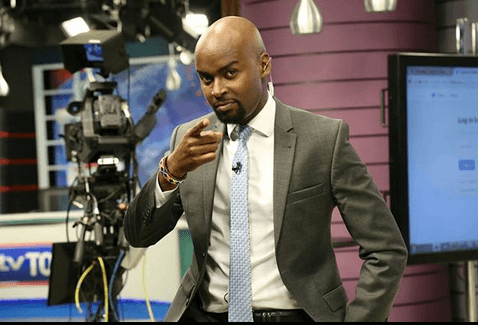 During last night’s dramatic media roundtable, President Uhuru Kenyatta and NTV journalist Mark Masai exchanged some few heated words for a short while after Mark raised the national debt issue. The exchange led to a huge buzz on social media as Kenyans reacted to the two gentlemen going head to head on LIVE National TV.

An egocentric and stubborn Uhuru tried to deviate from Mark’s question by turning it into a competition on who was the most knowledgeable on matters governance and the economy.

Despite Mark’s question on Kenya’s debt management plan being very clear, Uhuru decided to turn on him and make him feel and look inferior by using words like “Think like an economist” and asking him if he knew of Japan’s GDP, something that wasn’t even part of the discussion.

Mark boldy responded and told Uhuru, “I am not in Japan.”

I have seen people suggest that in his response, Mark was disrespectful and rude to the president, which I completely do not agree with.

In fact, Mark should be applauded for being a bold and brave man. For standing up to that man’s bullshit and for telling it how it is. We are not in Japan.

The president’s point was that Kenyans shouldn’t be worried about our national debt since Japan still stands strong despite their debt to GDP ratio of 198.6%. Kenyans have no problem with our public debt, in fact, they can borrow as much as they want to. What everyone wants to know is how the funds are used.

Like Miguna Miguna strongly told Uhuru, the Japanese government does not plunder its economy, offers services to its people and its leader accounts for both its debts and revenue to the public. Their political elites also do not loot various institutions dry.

Those accusing Mark of not being informed on the topic should know that different countries have different tipping points when it comes to debt. Japan is an extremely wealthy nation and their 198.6 debt to GDP is our 50. Japan is also one of Kenya’s biggest creditors. Can Kenya lend money to any nation out there?

Furthermore, the Japanese do not borrow from banks. In fact, their entire public debt is made up of market debt, that is, bills and bonds that investors like to hold, hence their debt service consists of interest payments, which are quite stable with interest on Japan comes to 12-14% of revenue. So, Mr. President, if there is anyone who is in dire need of an economics class, it is you.

If at all we are to talk about disrespect, nothing comes close to Uhuru’s lack of respect for Kenyans. For silently allowing his friends and family to plunder public resources and then trying to justify it by comparing us to a first world country.

Like one Kenyan posted after the roundtable discussion, Mark Masai deserves two medals for his performance last night, the second one just in case he misplaces the first one.