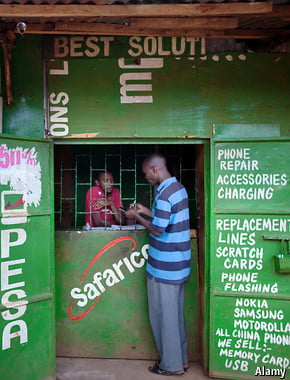 *Editor’s Note: This open letter to Safaricom has been published as received. No redactions have taken place to avoid legal issues pending a court order in favour of Bob Collymore. He will also confirm receipt of this same complaint.
Dear Cyprian,

As per our discussion, below is a story to confirm what I told you.

Some time in September, a friend of mine complained to me that she had loaded her phone with 100 bob of airtime but after two short calls, her airtime was gone. I advised her to dial 100 for prepaid customer care but these guys never pick. Since I’m on post paid, I decided to call 200, which is easily picked because we make for less than 1% of Safaricom customer base. She explained her problem and she was notified that she had subscribed to a games service called “Cheza Games” and that she was being charged for playing games. To which she notified them that to the best of her knowledge, she never made any subscriptions, nor has she ever played any games on her phone. They responded that she may have accidentally subscribed to the games. she had been deducted a whole 72 shillings in one short morning, 72% of airtime stolen! This prompted me to check my account and to my utter shock, I had subscribed to the same service and I had been billed a total of 1500 shillings in four months! When I enquired to know how, they gave me the same explanation of accidental subscription, at which point I demanded for a refund.

To find out whether you have subscribed to some services unknowingly, for prepaid, dial *100*5*4# and for post paid, dial *200*5*4#. Choose option “2” which is “unsubscribe”. If you haven’t subscribed to anything, you will see “no records found”. If you have, there will be a list of them. These services are offered by a category of companies calling themselves Premium Service Providers. Try sharing this with your friends and you will see the extent to which this fraud is being perpetrated. If there are any people who will find that they have subscribed, chances are that they have no clue how they got subscribed in the first place. Only a very small number of people actually know this because Safaricom is not willing to educate her clients on this because it will amount to loss of revenue.

In my quest to find out from Safaricom how they are letting these things happen, they actually admitted that there are some employees who have been colluding with these service providers by subscribing people via the back end without the knowledge of subscribers. Some employees actually own these service providers and many have been sacked having amassed hundreds of millions or even billions among them since these fraudulent activities have been occurring for many years now. I have written to Bob Collymore demanding that this should be put to an end by sensitizing Safaricom customers but to no avail. I shall forward to you my correspondence to him in a separate email. I demanded to get the contacts of the Cheza games and was informed that it is “Huawei Technologies”. I called them to inquire what I was being charged for and they told me that I was subscribed and even thought I don’t play, there is a flat fee of 10 shillings per day. However, in my billing. the first month was ksh.15, then 114, then 357, then 401, then 492. When I asked how come it escalated beyond the ksh.300 that is chargeable per month, given a flat fee of 10 bob per day, the guy couldn’t answer my question. Whenever Safaricom is faced with these complaints, they are quick to refund you because after all, only a few people know this. By refunding you, they pacify you hence buying your silence.

Further, the 100 customer care service never works, therefore, in the event of seeking help, one is discouraged and resigned to fate because no help is forthcoming but they have to continue communicating. As much as Safaricom tries to pass the buck to their employees, there is no way they can convince anyone that they are not in on it due to the fact that these service providers that are guilty of perpetrating this fraud are still on their platform. Secondly, they have not gone out of their way to educate their clients about how to unsubscribe from unwanted services. The reason Safaricom has looked the other way is fueled by the fact that sensitizing customers and thus leading to cancellation of these subscriptions leads to loss of revenue for them since these providers have a revenue share arrangement with Safaricom.

Furthermore, Huawei Technologies Ltd. is the biggest trading partner of Safaricom because it is Huawei equipment that runs Safaricom. Even the Ksh.30 billion camera deal that for the government was done with Huawei. Is it then a wonder that Safaricom and Huawei are colluding to defraud the Kenyan Mwananchi?

I’ve also tried to have this issue publicized via print media but I’ve hit a brick wall. I spoke to a friend of mine in Nation and told him to investigate the story. To start with, he realized that he was a victim also because he had subscribed to a service that he was not aware of. He gave the assignment to an investigative journalist but the journalist told him that there was no way Nation would print a story painting Safaricom in bad light because Safcom is a very large client of Nation.

Yesterday, I looked at my daughter’s account and realized that she had subscribed to ELEVEN of these services! I would urge you to tell all your family members to check their accounts too.Just to mention, one of the ways they trick you into subscribing is by having some banner somewhere as you are surfing the net, or pop-ups, which you click accidentally click on. Call Huawei Technologies employee whose name is Michael Sindani, mobile number 0723577443. He’s the one I called to enquire about my account and couldn’t answer my questions. We can use my account as a point of reference so that you can understand their activities.

A few individuals in conjunction with Safaricom have connived to steal billions of shillings from the common mwananchi, thus aggravating the already existing poverty levels in our country and we can’t sit back and watch this happening.

In this article:Bob Collymore, Huawei