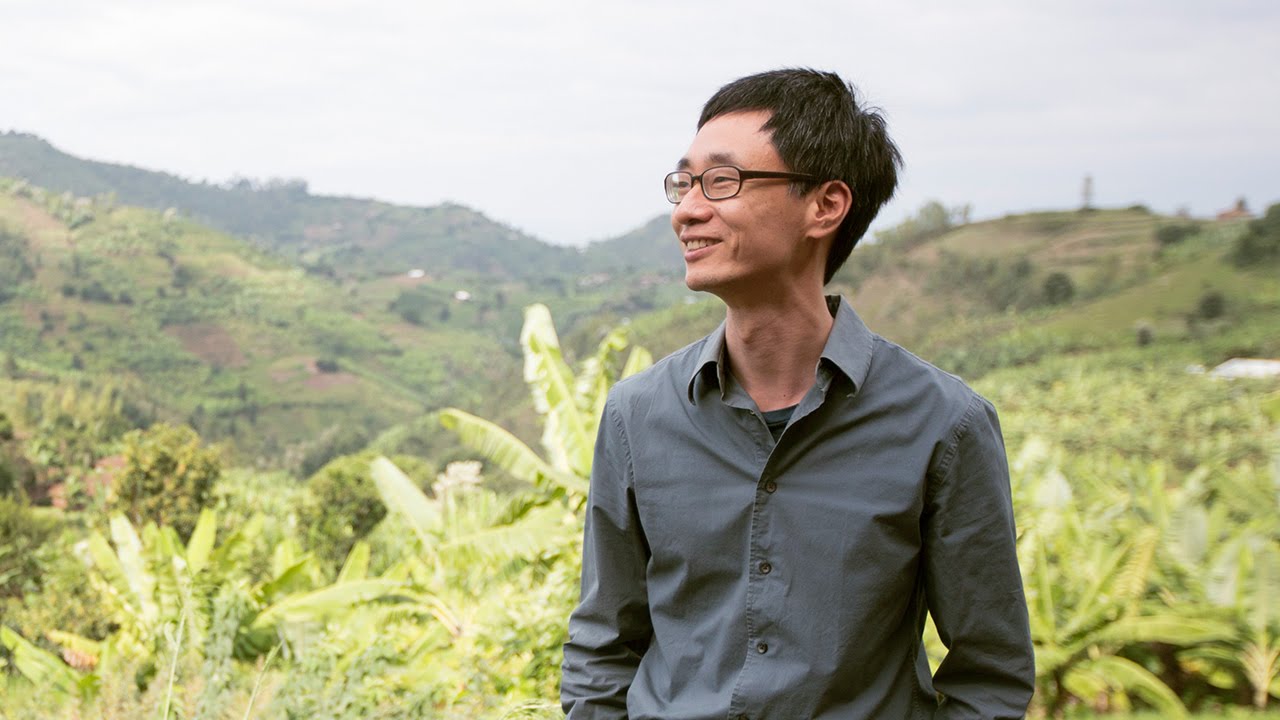 At around 5.40 pm on February 17, 2016, in Vancouver, Canada, Andrew Youn, the American founder of One Acre Fund, stepped onto the stage in front of about 1,200 influential people from across the world.

Andrew, a master orator, went ahead to give a well-rehearsed, tear-jerking story of how he had spent his first night in Kenya with what he calls a poor farm family. On this night, Andrew claimed to recall that they had sung songs together. Please don’t ask me which songs are these that an affluent Andrew could join in Lubukusu. They later ate what Andrew calls a “simple dinner” and when the time came to sleep, the Kellogg School of Management MBA student was handed a blanket to sleep on the floor.

The following day, in his exact words, “At lunchtime, I watched with an increasingly sick feeling as the eldest girl in the family cooked porridge as a substitute for lunch”. The spoilt rich kid adds:  “I cannot tell you how ashamed I felt when they handed one of those cups to me, and I knew I had to accept their hospitality.”

It is when savoring his rightful share of the lunchtime porridge that the idea of helping Africa’s rural poor was born, or so he claims.

As you can imagine, his story was a hit with the TED audience and Andrew received a standing ovation.

Needless to say, the bank accounts of his Bungoma – headquartered outfit that “fights rural poverty” also felt the effect of the standing ovation. The following year, according to the audited financials posted on the One Acre Fund website, his outfit’s bank accounts received no less than US$ 100,442,190 as total public support, revenues, gains, and losses.  Let that sink, yes, over 10 Billion Kenya Shillings.  More than half of this money, being $55,004,094 (over 5 Billion Kenya shillings), was gifts and grants to “help” Africa’s rural poor for one year alone.

Only one problem – these colossal amounts of money raised in the name of Africans was never intended to benefit the poor Africans.

That year, for their troubles as leaders of One Acre Fund, Andrew Youn and Anthony Kalm together received more than US$330,000 as compensation according to the Charity Navigator website, charitynavigator.org. Two people fighting poverty in Africa received more than US$330,000.  Poverty is big business in Africa. So lucrative  is this space that many Ivy League educated westerners, from Anushka Ratnayake’s myAgro in West Africa to Seth Silverman’s Factor[e] Ventures and Eli Pollak’s Apollo Agriculture in Eastern Africa, after a working stint at One Acre Fund , suddenly notice how lucrative the poverty fighting business space is and leave One Acre Fund to start their own spin-offs that “empower Africa’s rural poor”.

The inexperienced white expatriates at One Acre Fund, who no doubt form an integral part of the white savior industrial complex that Andrew is part of, received equally attractive packages for their “selfless work” fighting poverty in rural Africa.

According to a One Acre Fund employee who lodged a complaint with The Consumers Federation of Kenya (Cofek), the white men come from abroad, in the name of being expatriates but in real sense, they know nothing and have to be taught by local staff every little thing. According to the employee, the so-called expatriates promote mostly the people who go to have drinks with them and they have created an unethical and unprofessional work environment to an extent of sexually abusing young casuals and workers.

According to this employee, these so-called expatriates, for their troubles in fighting rural poverty across Africa, get approximately between Ksh 700,000 to Ksh 1.5M minus allowance a month, not to mention a weekly entertainment allowance of Ksh 20,000.

What of the token Africans doing back-breaking work at One Acre Fund?

For this, dear reader, I encourage you to visit the Kenya Law website and go through the court cases brought against the organization by exploited, humiliated and unfairly dismissed African workers.  A look at some of the cases brought before  Kenyan courts  (and they are many) reveals an organization that lives off the blood and sweat of poor Africans to fatten white expatriates. A classic example that comes to mind when the Ugandan playwright John Ruganda writes of “bleed the leech to fatten a heifer.”

Knowing how justice can be elusive for the poor in Kenya, one can only be left to wonder how many such exploited poor workers have not managed to seek justice at the Kenyan courts.

Among these countless cases in Kenyan courts (all of them ruled in favor of the employees, despite some of the workers having to represent themselves against One Acre Fund’s well-paid lawyers) is one of Everlyne Mamai versus One Acre Fund.  Everlyne was employed by One Acre Fund as a field officer at an entry salary of Kshs 4,000/= per month. That’s a paltry US$ 40 per month. Now, hypocrisy aside, what would her children feed on with a salary of  US$ 40 per month? What would they wear for that amount?  How would her family’s situation be different, if not worse, compared to that of the fictional family that Andrew alludes to in his TED speech? While Andrew was giving testimony as to what it means to come face to face with abject poverty, his outfit,  back in Bungoma, was doing the exact opposite – perpetuating it.

Even in the name of the white man’s duplicitous god, how does a non-profit organization that fights poverty among Africa’s rural poor pay its top executive near quarter a million dollars and then in the same breadth pay a  poor field employee, who has a family to feed, US$ 40 a month? What does it say when an organization that pays its white employee almost quarter a million dollars decides to pay an African Field Officer a meager salary of US$ 70 and house allowance of US$10?

Where is the conscience to even contemplate a house allowance of  10 dollars? Of course, it is not a question of conscience, it is one of race. You would have to regard black Africans as lesser human beings and by extension demean the value of their work to an extent of equating it to a paltry $40 per month.  You would have to think of them as not worthy of a life of dignity for you to offer them and their family, a house, sorry a  shack allowance of $10 dollars.

This was aptly confirmed a few months ago by Ayuma Michelle, a Kenyan communications expert who took to Twitter to give her feedback on what she termed as One Acre Fund’s unethical, biased, and racist recruitment process.

“Despite the directive to hire more Africans as managers for more impact on the ground, it still seems as though those jobs are being secured for the “white expat friends” most who are fresh college graduates. Some of your advertised jobs for African managers ended up being given to white expats with barely any experience and lower qualifications. ”

To explain this racist dynamic a little deeper,  allow me to introduce The Audacious project.

A few years ago, Richard Branson, Jeff Skoll, Chris Anderson from TED and other partners including Bridgespan, the Skoll Foundation, the Dalio Foundation, ELMA Philanthropies, MacArthur Foundation, and The Bill & Melinda Gates Foundation formed The Audacious Project, an initiative for philanthropists. In 2018, One Acre Fund was one of the first recipients of the over $280 million from this initiative to make millions of African people’s lives better. In 2019, The Nature Conservancy (TNC) received the backing of the same initiative to protect 4 million square kilometers of ocean over the next five years. For those not in the know, TNC are the CONservationists that are creating untold suffering in Kenya. When 4 million dwellers of  Nairobi city pay for water, this money goes straight to the coffers of TNC. These are the same CONservationists funding NRT which is disinheriting people off their land in Northern Kenya. The actions and intentions of both One Acre Fund and TNC are the same – benefit of white monopoly capital, without a care of what happens to the millions of African who call this continent home.

Just like TNC,  One Acre Fund is not serving the needs of poor African farmers but those of its financial backers like Bayer, the owner of Monsanto and the aggressive promoter of genetically modified seeds. When One Acre fund goes to small, rural communities like in Bungoma and offers these poor farmers exorbitant loans of hybrid seeds and fertilizer, it is part of a white monopoly capital strategy that serves interests of big agribusiness interests and profits. As such, let no African be fooled, One Acre Fund is part of a complex and elaborate scheme whose end goal is a corporate takeover and control of African agriculture and food production.

So the next time you see Andrew Youn feigning empathy for Africans and explaining how his organization is righting the challenges, just know that you have witnessed the real wolf in sheepskin- one of the many reasons why poor Africans will never break the yoke of poverty.

The ugly case of One Acre Fund is one that serves to explain why the massive inflow of finances from big western donors never transforms the lives of  Africans in any tangible way. In well calculated strategies disguised as philanthropy, the majority of the money western donors give is to white-founded organizations to further the long term and dirty interests of their masters. If you want to confirm, spare a day, go to Bungoma and see if there is any meaningful impact that One Acre Fund has achieved. Your guess is correct – ZERO.

Black man, you are on your own. Wake up and work out your own salvation. Only the God of your forefathers, the ones who were traded and shipped across the Atlantic, knows what you are up against.

“They tactfully climb on the shoulders of our underprivileged and unsuspecting colleagues in search of fresh air above and in return, pass the gas below exacerbating the problems of their bearers.” – Samuel Odawo

In this article:One Acre Fund