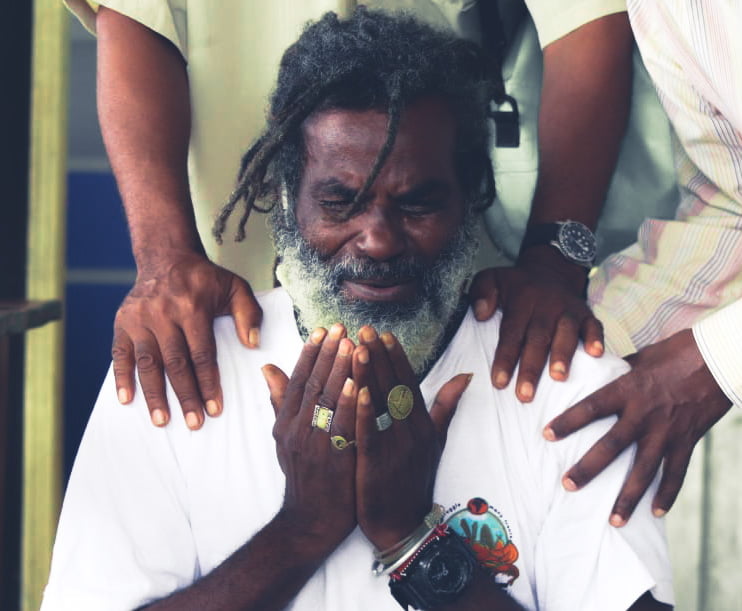 Omar Lali’s murder trial began the way his lover’s life ended…in uncertainty. Weeks after being granted bail by a Lamu court, Omar was on Thursday taken to the High Court in Garsen, where he was expected to plead to a murder charge. But 45 minutes later, he had collapsed onto the courtroom floor, tears rolling down his cheeks and onto his greying beard. Two days earlier, the Office of the Director of Public Prosecutions in Lamu received what looked like new evidence in the case that, in their words “was sufficient to prefer a murder charge” against the 51-year-old fisherman. While this was happening, Omar, oblivious of what was going on or what fate awaited him, was splitting his time between the sea and the company of his daughters and mother.

As he waded into the Indian Ocean and savoured the slight breeze that accompanied high tide, a feeling of peace washed over him. He did not know what it was, but he had a good vibe about whatever was coming his way. Omar was scheduled to appear before Lamu Senior Resident Magistrate Temba Sitati for what he thought would be the mention of an ongoing case involving the death of his lover Tecra Muigai, which had sparked claims of foul play from some of her family members. There had been no charges, yet, just investigation. And after spending two weeks in remand, Omar was certain that a murder charge was not on the cards. On Tuesday, July 7, Tecra’s mother and billionaire Tabitha Karanja called a Press conference at her offices in Nairobi’s upmarket Riverside Drive. Speculation was rife about what she wanted to say. Her handlers had indicated that the subject of the invite was the ongoing investigations.

But the news on that day belonged to someone else. State House Nairobi announced that President Uhuru Kenyatta would make his much-anticipated address on the country’s lockdown measures. Whatever he said, the President’s address would dominate airwaves. So Mrs Karanja’s presser was called off.  Back in Shela, Lamu, Mwanasomo Asuo Wamwenye, Omar’s mother, sat in her house, where he had grown up. On May 13, she had been forced to put up the house as part of the collateral that secured Omar’s bail and his release from prison. Since her son’s return, Mwanasomo had been having panic attacks. One minute she would be in conversation with friends and suddenly she would be overcome by a fear of losing both Omar and her house. What lay ahead for the family looked grim. One mother lost a child. Another might lose hers, too. One mother may believe her daughter met her death unfairly while the other believed in her son’s innocence.

But at the centre of their web of beliefs lay a common thread – an uncertainty of what a long murder trial would mean to both families from two different worlds and, most importantly, how the memories of the two people who brought them together would be honoured. At the Directorate of Criminal Investigations headquarters in Nairobi, an officer involved in the initial stages of the death probe got a text message from an acquaintance asking if there had been any new developments. During their last conversation, the investigator had said the State would settle on holding an inquest into what happened on the night of April 23, when Tecra fell to her death in the house she shared with Omar. “I am not aware of any changes,” the detective texted back. The acquaintance, a journalist, read the text and knew it was time to move on. There is no story, he thought. The trail had run cold.

Back in Lamu, where he had undergone a psychiatric evaluation and spent two nights at the Malindi GK Prison, Omar was not feeling particularly lucky as day broke. His murder case was supposed to start at 10am in the sweltering heat of Garsen, but the proceedings did not begin until 3.30pm. In a surprising turn of events, prosecutor Eddie Kadebe informed the court that the DPP wished to go in a different direction. The DPP, it appeared, had determined it was too early to push ahead with a murder case.

“The other side was represented by lawyer James Orengo and others, but they are not here. We will first withdraw the murder charge and take the direction of an inquest,” Kadebe said. That was when Omar collapsed in a tearful, grateful heap. Was it possible, he wondered, that he would be vindicated? After all, barely two days earlier, a court in Lamu had ruled that he should be charged with murder after the prosecution said it had fresh and compelling evidence.

“I am a happy man today. I have always said that I loved Tecra too much to harm her in any way. I thank God for seeing me through these past days and for giving me strength even after I was told I would be charged with murder. All glory belongs to God,” Omar told The Standard after a minute of composure and audible prayer. “The decision to charge Omar with murder was taken after an exhaustive review of toxicological evidence, detailed postmortem reports, phone records, other documentary exhibits and witness statements,” Kadebe had told Mr Temba on Tuesday. “They prove that Omar was behind Tecra’s murder.”

Tecra’s family represented by Orengo, Mwaura Waihiga, Victor Soita and Elisha Ongoya had said they were satisfied with the decision to charge Omar with murder. But even as the prosecution was claiming it had an airtight case, the defence was yet to be served with any of these crucial documents that the court would rely on to determine Omar’s fate. Omar’s lawyer, Aboubakar Yusuf, had not raised any objection but instead vowed to prove that his client was innocent.Omar is a free man pending the verdict of an inquest into what happened on that fateful night of April 23.