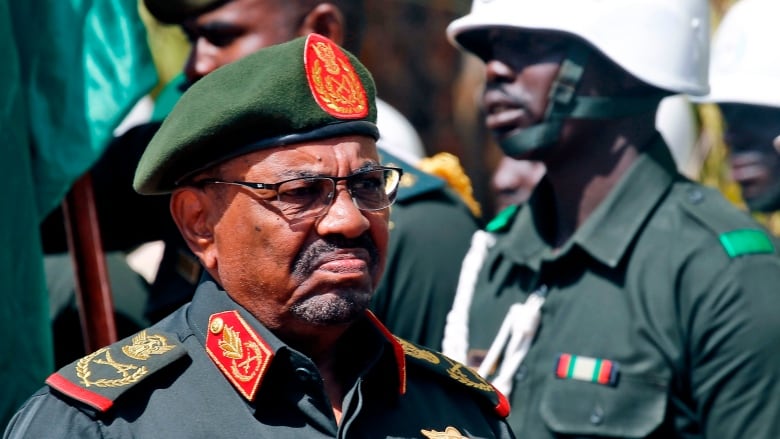 Omar Al – Bashir in Military Uniform: Government sources say he’s stepped down after months of protests by the People

The dictator of Sudan has fallen!

The man who butchered many non-muslims and muslims alike in Darfur and elsewhere in Sudan has finally stepped down.

No dictatorship however, benevolent can outwit the ingenuity of human longing and want for even better lives.

Today, the Sudanese military has announced that they are going to make a major announcement concerning a transitional government that is in the offing.

This follows months of protests, sustained by the downtrodden and depressed lot of Sudanese.

“The Sudanese army will issue an important statement soon. Wait for it,” a television anchor said, without giving further details.

Today (Thursday) marked the sixth day of a defiant sit-in outside the military’s headquarters, which also houses Bashir’s official residence and the defence ministry.

It is reported that the army surrounded the presidential palace in Khartoum.

The protest has not come without costs, 49 people, probably more have paid with their lives.

The one big challenge for Al-Bashir after leaving power

Who will now hide this war criminal wanted by the International Criminal Court (ICC)?

While in power, the corrupt Kenyan oligarchy and their South African counterpart failed to arest him and hand him over the ICC.

But now that he is out of power, things might only get hard for him.

Will the Sudan army hand him over?