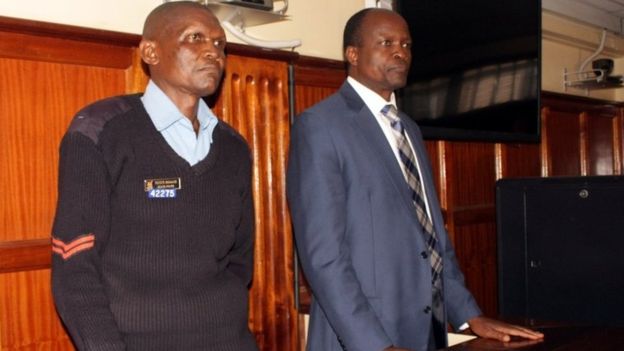 Okoth Obado, the Governor of Migori county in the dock at the Mililani Law Courts

Though Migori governor Okoth Obado is cutting the figure of a confident man in the dock, at prison he is behaving in a strange way which has made fellow prisoners and guards suspect he is going nuts.

The governor’s stay in prison was extended last week after High Court Judge Jessie Lesiit said she will deliver the ruling on bail application on October 24.

Obado, having been arrested on September 21, is being held at the Industrial Area Remand Prison.
The judge announced the date noting it will be the earliest as per her diary.

In prison, Obado cuts the image of a lonely figure and talks to himself, which is a sign of depression. The other prisoners, anxiously look at him whenever they spot him and refer to him as governor. The governor, who at one time was accused of procuring a bed worth Sh1 million using public resources but refuted the claims as a narrative sponsored by his opponents, is now sleeping on the cold floor though he has a mattress.

In his prison room, while sleeping on the matress, he keeps on gazing at the ceiling at times mumbling words. He even at times cries during the day and night. Due to his strange behaviours, he is keenly monitored by prison warders. He does not go and pick food as it is required but is served by one of his co-accused.

During the day, the remandees have allowed him to be sitting in the only available chair in the open area while they sit on the ground.

Following his hospitalisation at Kenyatta National Hospital, the governor is now getting a special meal while the other remandees eat half-cooked ugali and half-cooked cabbages.

He is also being allowed to get milk and bottled water after paying the warders.

Like all the other prisoners, he is using his hands to eat.

Whenever Obado’s wife, Hellen, children and sisters visit him, when they leave, the governor openly sheds tears.

He was once overheard asking his personal assistant Michael Juma Oyamo and county assembly clerk Caspal Obiero remanded in the same cell with him at Industrial Area; when will this Sharon ghost ever end? Those who have visited him say he has lost weight with his eyes turning pale yellow.

The trio have been charged with the murder of Rongo University student Sharon Otieno and her unborn child.

He goes for long and short calls in a bucket placed in the room but he is now used to. Obado also reads the Bible in prison and sings religious songs.

On Sundays, he attends prayer services officiated by cleared preachers from outside. His favourite song being, Sinking below in this sinful world but where should one go but only to God.