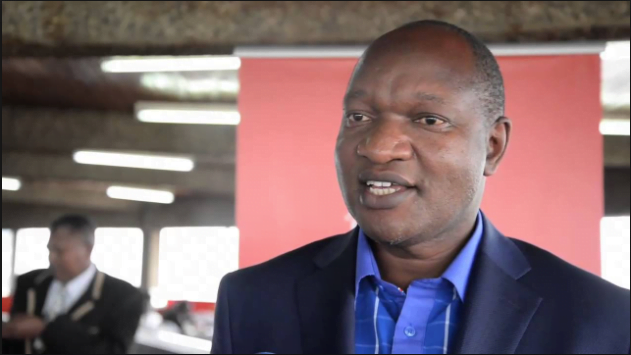 CAPTION: Daniel Ojijo founder of the Homes Kenya Expo has been named as a beneficiary of stolen Government money being laundered through the property market. He is possibly aware of many other Government officials using his many fronts to invest on behalf of Government crooks.

The Public Investment Committee has noted that money stolen from Government has been largely used to invest in real estate, and being that the sector is largely unregulated, acts as the best conduit for money-laundering.

Kenya has become a superficial society that glorifies money from churches, to places of work. Meaning that there is a race for primitive-acquisition of land and property, precipitating the sometimes unrealistic prices of real-estate in Kenya.

We recently cautioned Kenyans against blindly following mainstream media agents like Maina Kageni, who has made it his habit to misleading individuals with generic hype into buying sketchy developments from shadowy developers.

CAPTION: Newspaper article showing that Kamuthi Housing Cooperative Society is in the red, and investors who purchased their projects like Buffalo Hills and Soya Dam Estate could have been duped by the cunning directors. Bandit economy.

Kamuthi Housing Cooperative Society recently admitted that it has been unable to service its Kshs. 600 Million loan which it used to acquire vast tracts of land. Maina Kageni had been instrumental in marketing the projects through his Classic 105.2FM platform, as you will see in this video at the tail-end of this article where he introduces Soya Dam Estate owned by Kamuthi Sacco.

Reports reaching our newsdesk indicates that Kamuthi will attempt to pull a Chris Kirubi, where shareholders and buyers will be duped into believing that the company is broke, leaving the project to be acquired by its financial partners who loaned them the money. The bank will then send receiver managers, the crooks of Kenya’s financial sector to move in and work out modalities of executing the heist.

Ultimately the receiver managers in collusion with directors of Kamuthi Housing Cooperative Society will purport to source for a buyer in-order to bridge the debt deficit, and shareholders/buyers will be duped into accepting meager cash-settlements, many of whom will opt out due to fatigue and lies from the aforementioned axis of evil.

CAPTION: Maina Kageni hyping the Soya Dam Estate, a project of Kamuthi Housing Cooperative Society which is now in debt. Directors want to shaft shareholders and buyers into off-loading their land to a third-party. We told you to be wary of Maina Kageni’s schemes but you thought it was a vendetta.

And ladies and gentlemen, that is how industrial-scale frauds are executed in Kenya. Even Thika Greens which Maina Kageni hyped by hosting golf-tournaments, has ran into problems and its financial partner Equity Bank took it over. Clients are now paying Equity.

When you follow the wind and buy into every convoluted idea hyped on the mainstream media, be prepared to face the consequences.

Kenyan mainstream media plus the 8-4-4 system has nurtured a strain of anti-intellectualism where these days we witness a herd mentality. This means that anti-intellectuals become the metaphorical-equivalent of an angry lynch-mob when anyone either challenges one of the mob beliefs or posts anything outside the mob’s self-limiting set of values.

Kenyans have now the current state of affairs where a bunch of inferior minds assumes prominence and skews young and educated minds into spectacles of fashion, entertainment, further directing their unknowing audiences/listeners towards trivia, towards the inconsequential, towards unquestioning and blatant consumerism. This has resulted in intellectual complacency. People accept without questioning, believe without weighing choices, join the pack in a culture where convenience rules and real individualism is too much work. Thinking takes too much time.

Unlike the Asians who have become power-houses, Kenya is full of “religious” schools like the infamous St. Mary’s which was a social experiment by a misguided Catholic priest. Religious schools such as those run by the Catholic or Anglican churches condition students to avoid knowledge from basic tenets of science and understandings of history and instead shove down religious teachings masked in the flawed 8-4-4 system.

It’s not a coincidence that Maina Kageni can single-handedly drive individuals into spending their hard-earned money without questioning the financial health or the histories of individuals behind some of these grandiose projects. Kenyans don’t also question the sporadic increase of real-estate prices and simply act without reflex.

Daniel Ojijo is one such character who has built his real-estate empire by providing an avenue for Government officials to buy properties and launder their ill-gotten wealth. Duchess Park where owner of Quorandum Limited Mukuria Ngamau bought an apartment is owned by Daniel Ojijo through many proxy companies.

Ngamau’s apartment for the sake of clarity is C16 at Duplex Apartment, Duchess Park Limited. It is a 5-bedroomed apartment valued at Kshs. 48,500,000.00 but according to the report by the Public Investments Committee hasn’t been paid for stamp duty at the Ministry of Lands.

All line agencies mandated by law in recovering stolen assets from public coffers have received the clearest signal yet from Parliament, in a tabled report confirming that real-estate in Kenya is the biggest beneficiary of stolen public funds. A separate amendment should be included which would compel the crooked real-estate companies to conduct due-diligence on prospective clients or risk deregistration should they invest on behalf of shadowy individuals.

Money from Somali-based terror groups like Al Shabab and Pirates off the Gulf of Aden also managed to invest in Kenya’s real-estate using the various companies like Ojijo’s. Even Rwandese fugitive Felicien Kabuga is a big investor of real-estate in Kenya using the money he stole during the horrific Rwandan genocide. Yes indeed, all land and real-estate companies need to be vetted afresh and their links to corrupt Government officials or terrorist be dismantled.