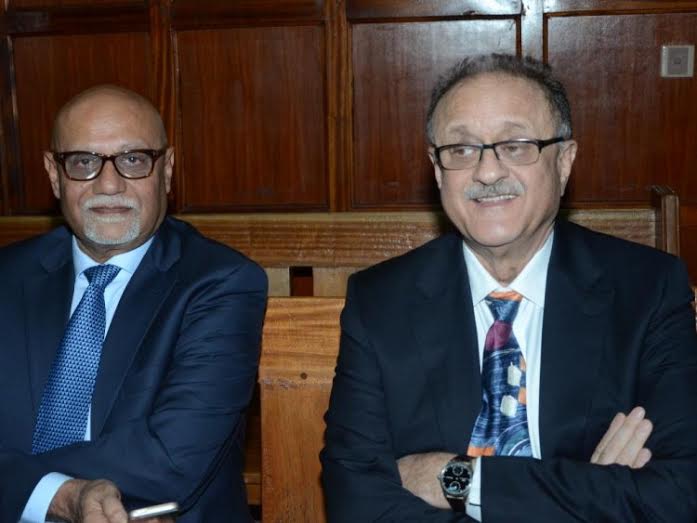 Caption: Rashmi and Deepak Kamani, at the centre of the Anglo Leasing case.

On March 9th 2016, deputy director of public prosecution Dorcas Owuor asked the High Court to enter plea of not guilty against the company in absentia to allow the case against the other suspects who are present to start.

The application was opposed by lawyer Ahmednassir Abdullahi for the Kamanis saying the state is not even sure the company exists and therefore cannot ask plea of not guilty be entered.

This came as it emerged that letters & summons sent by EACC sent to the Office of the Attorney General for onward transmission to the AG of Virgin Island and the Republic of Mauritius to compel Infotalent to attend court and answer charges “never got to its destination.” The letters were sent in June last year according to EACC lawyer Julius Muraya.

Abdullahi wants the court to dismiss application by the DPP and allow case against his client’s the Kamani’s proceed. In the case DPP had dropped charges against Bradley Birkenfeld who is an American national and made him a prosecution witness.

Bradley Birkenfeld was Kamani’s money launderer and apart from the Kamani’s is the only one who would 100% know who Kamani paid kickbacks to. Birkenfeld’s home address is the Infotalent registered office. He may need to testify via video link in a move that can alter the tangent of the Anglo-Leasing case.

Some background information on Infotalent.

Birkenfeld Under Suspicion of Corruption

Bradley Birkenfeld is principal witness in American prosecutors’ case against UBS. His name has now also unexpectedly emerged in the record of a corruption case in Kenya.

The former UBS banker Bradley Birkenfeld was arrested after landing at the airport in Boston and was subsequently brought before the courts.  In an attempt to save his own skin, Birkenfeld agreed to cooperate with American prosecutors and became the principal witness in a case against UBS, a major Swiss bank.  Eight months later, surprising evidence has emerged from Kenya:  the evidence suggests that the same Bradley Birkenfeld was involved in a scheme which cost the Kenyan treasury 90 million Swiss Francs.

The case is part of the so-called Anglo Leasing Scandal, which was uncovered in 2004 and which involved fraudulently obtained government contracts worth more than a billion Swiss Francs.  Kenyan officials and ministers are suspected, along with foreign accomplices, of having established a network of corruption which has been traced all the way to Switzerland, as the NZZ already reported in 2007.

What was unknown until now was that Birkenfeld’s name, as well as his private address and telephone number in Geneva, appeared on a number of pieces of evidence in the possession of the Kenyan Anti-corruption Commission (KACC).  The Kenyan investigators had however overlooked this fact until now: they mistakenly read the signature as “Buckenfeld”, but a look at the documents made available to the “NZZ am Sonntag” shows that the signature in fact reads “Birkenfeld”.

If Birkenfeld is indeed involved in the Anglo-Leasing Scandal, it would shed a new, more negative light on the principal witness against UBS (see Box).

Birkenfeld’s alleged Kenyan connection began in 2003.  At that point in time, he was already working for UBS in Geneva.  According to the KACC, the attempt to plunder the Kenyan treasury worked as follows:

A Genevan dummy corporation called Infotalent submitted to the Government in Nairobi an offer for a computer system called “E-Cops”, which was intended to introduce the Kenyan police to the digital age.  The 107 page offer and subsequent correspondence were signed by the “Director” of Infotalent, B. Birkenfeld.  On 19 November 2003, a delivery contract worth over 90 million Swiss Francs was concluded.  The contract was signed with no tender process or any real negotiations over price having taken place.

An agreement marked as being “secret”, again signed by “B. Birkenfeld”, gives the impression that Infotalent would prefinance the not yet delivered computer services.  Kenya undertook to reimburse this sham credit in installments.  To the KACC, it is evident that the contract served only one purpose: embezzlement of State funds.  According to the KACC, “E-Cops” was never installed.  Kenya nevertheless payed its alleged debts, and transfered the installements on time to Infotalent’s account at HSBC Private Bank in Geneva.

Following the uncovering of the Anglo-Leasing Scandal in 2004, and with it of the Infotalent case, Nairobi ceased the payments.  By that time, approximately eight million Swiss Francs had already been credited to Infotalent’s account.  After the scandal received a great deal of attention in Kenya, Infotalen quickly sent the funds back.  The KACC suspects that the funds were reimbursed merely to avoid a criminal prosecution.

Infotalent is not registered in the Swiss Register of Commerce.  On numerous documents, the company provides two different addresses, as well as a telephone and fax number:  the telephone number is today no longer in service, but in 2003 it was registered under Birkenfeld’s name.  Moreover, one of Infotalent’s two business addresses turned out to be Birkenfeld’s private address, Cours de Rive 20 in Geneva.  No indications can be found in the records that Birkenfeld’s employer at the time, UBS, had anything to do with the scheme.

There are uncertainties surrounding the signature.  The lettering of the signature on the Kenyan documents does not correspond to that used by Birkenfeld in signing official forms in the United States or in Switzerland.  However, there are at least two different types of lettering on these documents.  Does Birkenfeld modify his handwriting?  Or did someone else fraudulently use his identity for the purposes of the Infotalent dummy corporation?  This hypothesis does not however appear likely, as the attempt to defraud the Kenyan State would have been exposed if a Kenyan official had attempted to reach Infotalent.

Birkenfeld is not the only name which has arisen in the Infotalent case:  The fax number of the company, as well as its second address in the Geneva suburb of Chêne-Bougeries (see picture), belong to an Indian named R. (the person’s full name is known to the publishers).  R. currently lives in Canton Vaud.  He knows Birkenfeld, as they both worked in the years 2000 and 2001 for Barclays Bank in Geneva.  When the funds intended for the Infotalent dummy corporation were being paid to the HSBC account in Geneva, R. was an employee of HSBC.

The Kenyans want to find out more about the individuals involved in the case.  As a result, Attorney-General Amos Wako sought legal assistance from Switzerland in July 2008.  The request lingered with the Federal Office of Justice for half a year before it was transfered to the Office of the Attorney-General, shortly after the “NZZ am Sonntag” had made inquiries concerning the case.  According to the spokesman of the Federal Office of Justice, Folco Galli, the examination of the request “lasted longer than usual as the unstable political situation in Kenya had to be considered.”

Birkenfeld and his lawyer could not be reached for comment on Friday and Saturday, despite numerous attempts.  The Indian R. confirmed that he “had briefly met” Birkenfeld some years ago, but denied having had anything to do with Infotalent.  According to him, it is “absolutely impossible” that such a company could have used his private address.  UBS declined to comment on this newly uncovered information on Bradley Birkenfeld.

The front company Infotalent allegedly had one of its two business addresses here: House in the Geneva suburb of Chêne-Bougeries.

The principal witness of the USA Birkenfeld and UBS

The now 43-year old American Bradley C. Birkenfeld has lived in Switzerland since 1996.  From 2001 to 2006, he worked for UBS in Geneva, where he was in charge of wealthy private clients in the USA.  In the context of investigations into one of his clients, Birkenfeld caught the attention of American prosectuors.  In May 2008, he was arrested in Boston and was charged with abetting tax evasion.  Birkenfeld contended that UBS had incited him to do so.  He cooperated and provided US prosecutors with ammunition for further investigations.

The consquences for UBS have been serious:  In July 2008, the US sought legal assistance from Switzerland, requesting information on UBS clients suspected of tax offences.  A number of US clients fought the disclosure of their banking information before the Federal Administrative Court, and the case is still pending.  In November 2008, the US brought charges against Raoul Weil, a senior UBS manager.

For UBS, the case may result in a settlement and a fine in the billions.  Birkenfeld is currently under house arrest and awaiting his sentence.  He hopes that, as a result of his cooperation, it will be a mild one.  (hä./K. P.)