Things have happened very quickly, former DPP Keriako Tobiko resigned from his position and was appointed the Minister for Environment in the Uhuruto Cabinet.

Meanwhile, a 7-member committee has been formed to go through the paces of finding a new DPP. However, word on the street has it that a determination has already been made that EACC Deputy Director Micheal Mubea, will be fast-tracked for the job.

Why would the senior officers within ODPP be by-passed so openly? The likes of Dorcas Oduor who is running a jail case review or Duncan Ondimu or even Deputy Director Patrick Gumo?

We have a sense that some things have a way  of coming back to bite you in the arse, much in the same way that complaints by the Grand Mullah against DCI Ndegwa Muhoro about death threats and Tatu City ultimately cost him his position.

A year ago we run a story about how ODPP had been misused to concoct a criminal prosecution against an innocent party and enable a certain well-connected party to wrest property from the former.

So weighty were the allegations that ODPP moved with speed to demand for the police file, in order to address the very evident abuse of prosecutorial prerogative. 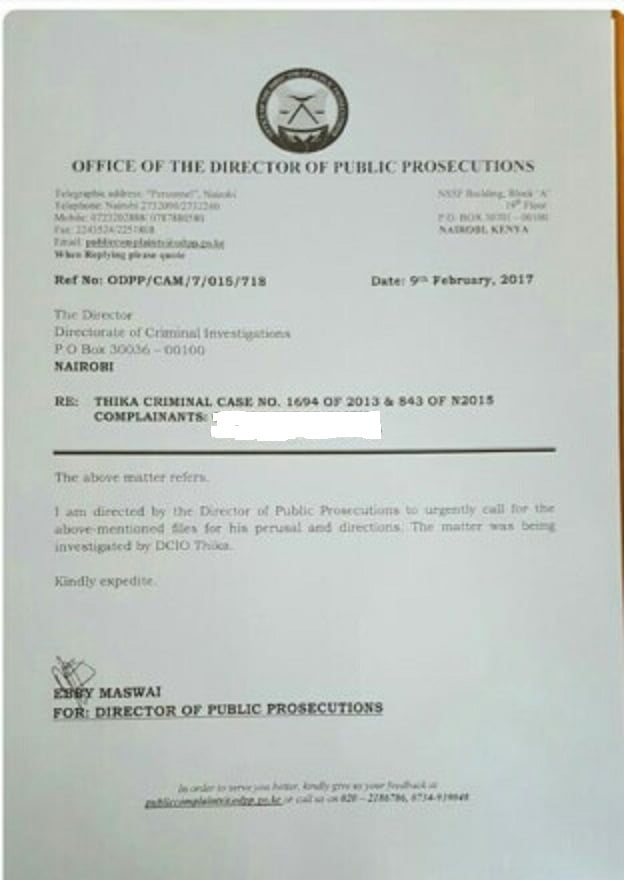 Inexplicably, former DCI Ndegwa Muhoro ordered his Head of Land Fraud Unit –Abdalla Komesha – not to release the file to ODPP while simultaneously, someone in the upper echelons of ODPP ordered that the review of the prosecution be stopped.

Under ordinary circumstances, it is understandable that people who have committed crimes would try to coerce ODPP into slowing down on their prosecutions.

However, what does it say about a complainant who would use great influence to compel an institution of last resort like ODPP to manufacture evidence and also suppress exculpatory evidence, against their rivals in a property dispute?

Remember, the same property dispute has been before the Environment and Land Court for adjudication for over a decade.

Why would DPP knowingly put a CID officer and a Government official to commit perjury by lying to the Court in giving this manufactured testimony and evidence?

You can imagine the irony, every day on Twitter and Facebook, the citizens of Kenya are bombarded with messages asking them to report their complaints to a specific department of the ODPP.

When we sought to follow up on this particular matter, after making numerous calls, the polite people in the department finally came clean and confessed that the complainant in this case was too influential, and that she seemed to hold sway over the bosses at ODPP. There was really nothing the complaints department could do!!!

Kenyans expected that with a DPP who was independent of the AG, had security of tenure and who got sufficient support to replace the dreadful police prosecutors with properly qualified prosecution counsel, these shenanigans would have been a thing of the past.

Boy were we mistaken…!