The Socialite Governor of Mombasa County Hassan Joho is under pressure from the ODM owners and supporters from upcountry (Bara) for failing to help the party retain the Msambweni Parliamentary seat two weeks ago.

Joho who cried after the Msambweni by-election was won by DP Ruto’s man was barred from getting to his party leader Raila Odinga by inside goons who accused of bungling Msambweni elections.

The ever politicking orange party thought Msambweni by-elections would be a good testing ground for Raila’s BBI and 2022 presidential run but independent candidate Feisal Bader beat their Omar Boga.

Bader enjoyed good support from the Deputy President William Ruto is most likely to face off with ODM leader in 2022 predential elections.

The loss is adding injuries to wounded ODM that has remained in its diminishing strongholds and not expanding since 2018 when it entered into a handshake deal with President Uhuru Kenyatta.

The Msambweni seat fell vacant after the death of MP Suleiman Dori of ODM earlier in the year but has now gone to DP Ruto who is snatching Kwale County from Odinga, the same way he is taking Kisii County.

Joho’s loudmouth and bravado style failed to sell ODM and Raila who are facing a strong opposition from young and fresh electorate.

“I want to ask my party leader Raila Odinga not to even set foot here in Msambweni to campaign for our candidate because I will show them dust that they have never seen before,” Joho shouted. 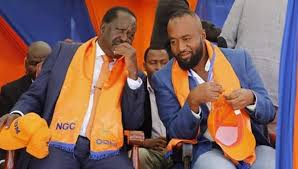 Joho and Raila Odinga in past ODM event [p/courtesy]

On the contrary Ruto did not step foot to campaign for Bader when Raila camped in the coastal county and lost even after intimidating the DP’s men with state machinery and baseless covid-19 shenanigans.

Joho used the Msambweni campaigns to throw salvos at the DP who only sent former senators and MPs from neighboring constituencies to drum up support for Bader.

He challenged the DP to stop twitting, posting pictures but to go on the ground and face him if he was man enough. He further belittled his Kwale counterpart Salim Mvurya as a politically weak man stop him from campaigning and winning in Msambweni which is in Mvurya’s county.

President Uhuru gave ODM’s Boga some Sh5 million and Raila added some Sh3 million which he pocketed and broke out his campaign team which he denied even a penny.

Boga banked all the cash in his Equity Bank account after sensing defeat, if anything Raila’s party also lost in Wundanyi/Mbale ward by- election in neighbouring Taita Taveta County.

Before the Msambweni loss, Joho’s camp had been assured post of deputy premier if BBI report sails through but Raila no longer has confidence in a man who has stood with him since 2005.