More than 50 MPs, mostly in National Assembly leadership positions did not attend most or all of their committee meetings, a new report finds.

The National Assembly’s 29 committees report shows that 10 lawmakers skipped all committee meetings between February and October 2019. Some attended once, twice or three times in the period, with the majority attended less than half of parliamentary committee sittings.

Hon. Junet Mohamed (Minority Chief Whip), Aisha Jumwa and Adan Keynan are named among regular absentees. Outspoken Junet only managed to attend 19 out of the 97 meetings of the Public Accounts and Investments Committee including the two panels scheduled by the Selection Committee which places members in House committees.

Jumwa did not attend all the 49 meetings of the Members Services and Facilities Committee.

Keynan skipped 38 of the 42 meetings of the National Cohesion and Equal Opportunity Committee.

The report was tabled in the chamber by the recently appointed Majority leader Amos Kimunya. Parliament cannot transact it’s  businesses without the committees. Bills and proposal pass through the committees before they are brought to the floor for debate and adoption.

Last Wednesday, the continued purge in Jubilee saw many changes in house leadership where disloyal jubilee members were swapped with Nasa affiliates.

Kimunya downplayed the reshuffling as he attributed it to attendance and commitment of members to committees. “We must take cognisant of the poor attendance of members. We cannot continue burdening the other members with some who do not attend,” Kimunya said.

Report further finds that the committees only held 2 of the 97 meetings during the said period. The Selection Committee’s two meetings were the least and the Public Accounts Committee’s 97 the highest. 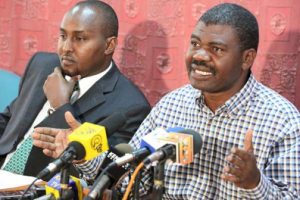 MP Kosgei skipped 20 meetings of the Trade, Tourism and Cooperatives Committee when Nakuleu skipped all the 33 meetings held by Regional Integration Committee.

Hon. Sambu skipped all the 52 meetings of the Delegated Legislation and was named among the poorest performing in plenary in the Mzalendo Trust report.

The National Assembly Standing Orders demand that each of the 349 members is entitled to sit in at least one committee and a member who fails to attend four consecutive sessions of the committee without written permission from the chairperson or the speaker shall be replaced.