Orange Democratic Movement has distanced itself from the failure by the Senate to pass the third basis for revenue sharing formula saying the passage of the formula is the responsibility of counties.

ODM chairman and Sunba South Mp. John Mbadi (Suba South) and secretary-general Edwin Sifuna dismissed those blaming the party saying that each senator votes on the formula that will benefit his county.

They accused those blaming ODM and it’s leadership of political mischief.

“Making the failure of the passage of the formula an ODM issue is dishonest and a political mischief,” Mbadi said.

He added that each senator voted on the Irungu Kang’ata’s amendment to the Senate Finance Committee report on an individual basis because senators protect their counties.

Mbadi went further to state that the senate voted in a pattern that was purely gainers against losers as he questioned the sincerity of politicians allied to the Deputy President William Ruto stand on the formula.

He claimed that Elgeyo-Marakwet Senator Kipchumba Murkomen voted against the Bill despite his county gaining in the proposed formula, while Susan Kihika, Samson Cherargei, Aaron Cheruiyot and Christopher Langat voted for the revenue formula.

“Why could Aisha (Jumwa) and her Tangatanga adherents not blame Ruto for the impasse on the revenue-sharing yet his allies voted in support of the amendment?” Mbadi asked. 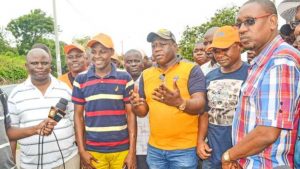 A section of Coast Mps who accused Raila of betrayal. [p/courtesy]

A section of Coast Mps have threatened to ditch the orange party for supporting that will see them lose in terms of revenue allocation.

The politicians led by Owen Baya of Kilifi North castigated Raila and accused him of ditching them over the revenue-sharing formula.

“This is the highest form of betrayal. The debate and subsequent vote on Kang’ata’s amendments has exposed who our true friends are. ODM senators from Luo Nyanza threw the Coast region under the bus,” Baya said.

On saturday, Former Nasa Strategist David Ndii called on senators to reject the bill which he claimed will burden counties like Mandera and enrich the ones in Central, Rift Valley and parts of Nyanza.