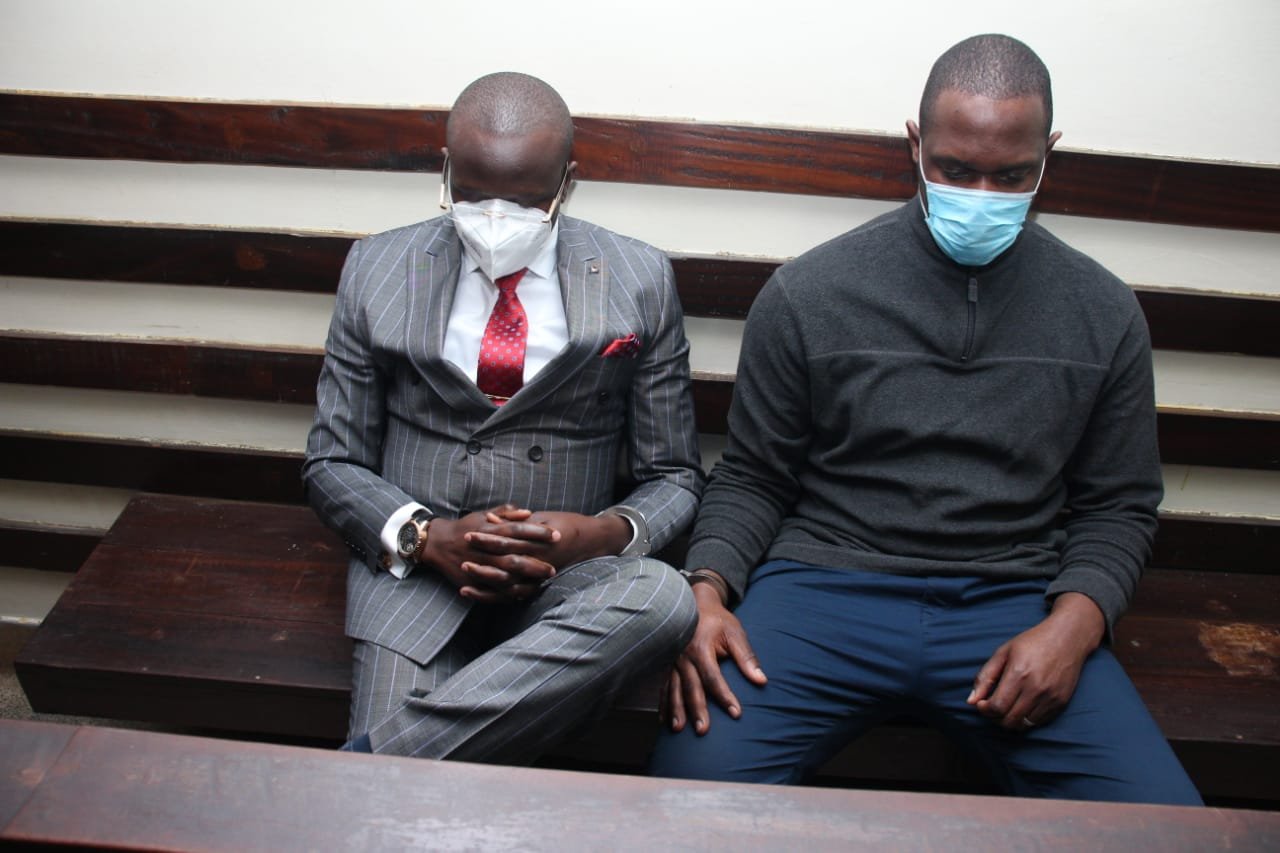 CAPTION: City businessman Chris Obure and his bodyguard Robert Ouko: The two are set to be charged with the murder of Kevin Omwenga

On Friday afternoon, the High Court ordered that mental assessment tests be conducted on controversial city businessman Chris Obure and his bodyguard Robert Ouko before they can stand trial for the murder of their counterpart Kevin Omwenga who died under contentious circumstances more than a fortnight ago.

Justice James Wakiaga, while rejecting an application by the prosecution to hold them for a further seven days, ordered that the two be remanded at Kileleshwa Police Station as they await to face charges on September 7.

Even as the duo continue to cool their heels behind the cold cells, it has now emerged that after police declared they had finalized investigations on incident in which Omwenga was killed in his house, Obure decided to throw his trusted lieutenant under the bus and leaked CCTV footage from his own office to Kenyan media.

From the clip exclusively shared by Citizen TV,  Bodo is seen collecting the gun from Obure’s office at around 6:26 am on the 21st of August, the same day Omwenga lost his life.

He is seen heading to Obure’s desk drawer where he picks up some keys and proceeds to open a safe mounted at one corner of the office from where he takes out a gun, cocks it and holsters it.

He then returns the safe’s key and makes his way out of the office.

As the news reporter Hassan Mugambi notes, during the entire period, Obodo is seen in constant communication with someone on the walkie-talkie.

Much later into the evening, at around 11:37 p.m, moments after the tragic incident, Bodo is again captured making his way into the office and returning the gun back into Obure’s office safe.

Investigators are now expected to use this new footage to rule out Ouko’s earlier statement where he claimed the shooting occurred accidentally as he got the firearm from Omwenga who had requested for it to ‘show-off’ after inviting a girlfriend to the house.

As per ballistic investigation results, the trajectory of the bullet head that pierced through Omwenga’s heart and hit the wall before ricocheting to his bed rules out the possibility of an accident.

Through his lawyer PLO Lumumba, Obure denied knowledge of Ouko taking the gun from his office.

In his defence, he claimed that on the fateful day, he was busy locked up with the rest of his employees at a meeting inside a Nairobi hotel.

Police say they are also investigating reports that the killing may have been a result of a gold deal gone sour.