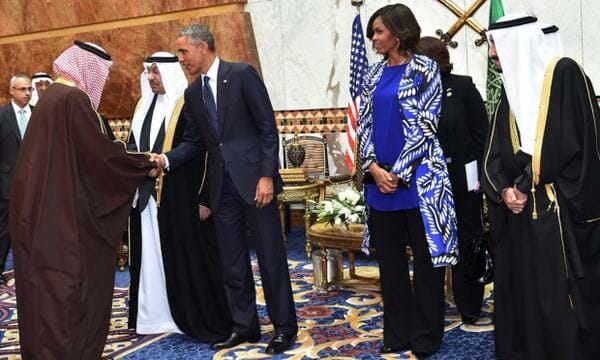 President Barack Obama refused to march is solidarity/ unity with Victims of Charlie Hebdo attack but dropped everything to travel to Saudi to pay to pay homage to the dead King who was Key and instrumental in cultivation of terrorism and seriously undermining the West.

Obama has even refused to Visit his fatherland, A country he skipped when he Visited Tanzania. It is also painful that he used pictures of him and his grandmother going to the market to get sympathy Votes

Salman who happens to be the dead King’s brother will definitely prove to be more dangerous like the house of Saud, the Wahhabist clerics who rule both houses using the Vile Sharia law. Obama’s Immigration laws have been under criticism- He supports Radical Islam and has bowed to Islam.

The new king of Saudi Arabia, Salman bin Abdulaziz al Saud, the half-brother of King Abdullah, who died in his early 90s from complications from pneumonia, is expected to rule with a more Wahhabist-oriented religious bent and concentrate on limiting cautious political reforms started by Abdullah. Salman is also expected to devote his energies to increasing Saudi national security. Salman’s devotion to Saudi security is hypocritical at best due to his past support for Al Qaeda, including some of the individuals implicated in the 9/11 attack on the United States. It is Salman’s involvement with financing 9/11 and other terrorists that will likely reinforce the Obama administration’s refusal to declassify 28 missing pages from the 2002 Senate Intelligence Committee’s report on the intelligence failures surrounding the attack. As the then-governor of Riyadh, Salman’s name likely appears as a «big fish» in the redacted 28 pages from the Senate report.

On the surface, Salman will not govern much differently than his predecessor in affairs of oil politics and national security. Salman will be assisted by his son, Prince Mohammed bin Salman, the minister of defense and the chief of the royal court. Mohammed was the chief adviser to his father when Salman served as the governor of Riyadh province. Prince Mohammed became defense minister when his father acceded to the throne upon the death of Abdullah.

Saudia is a dominant producer in OPEC and has continued to increase its oil output despite an oversupplied market suppressing prices aimed at rendering the West’s productions and exploration of Shell oil economically unviable.

The International Monetary Fund has estimated Saudi Arabia’s cash reserves at between $750 billion and $2 trillion, which can easily sustain its losses and buy sufficient time to cripple US plans and keep oil dependency on the Saudis.

Things are always sustainable in Saudi Arabia where they can afford to keep paying,” said Steffen Hertog, an associate professor at the London School of Economics.