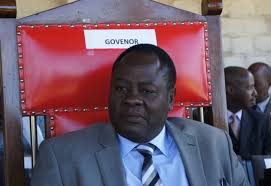 Pamphlets implicating Nyeri county governor Ndiritu Gachagua in corruption were dropped on the streets of Nyeri town but were immediately collected and removed.
The pamphlets headed “Inside Ndiritu Gachagua’s Corrupt Empire in the County Government” and “Nyeri United Against Corruption” contains various allegations about misappropriation of public fundsby the governor.
One pamphlet with an attachment made available to this writer alleges Gachagua has stolen millions from the county to buy 35- acre farm at Chaka.
It is claimed that Gachagua bought a Range Rover vehicle and completed his holiday villas in Vipingo, Mombasa where he spends his weekends and that he operates from Nairobi office that cost the taxpayer Sh1.5 million.
The pamphlet alleges that Gachagua is never in Nyeri and that occasionally, he is seen only five days in month.
It claims that Gachagua appointed Dunstan Magu Ngumo whose court case is still pending since January 8 2009 when he was charged with stealing Sh421 million from Kemri, to be his adviser and finance administrator.
The pamphlet alleges that the board under chairperson and vice chair is nothing but a puppet since it is from Mathira subcounty.
It is further claimed that Nyeri county pays for two of his four wives Sh300,000 every month when one of them is nominated MCA who together with all other MCAs, have allegedly been corrupted.
It is further alleged that the first lady travels under police security guard to Nairobi, Mombasa, China, America and Britain while Gachagua is paid Sh200,000 house allowances every month for his house in Ring Road and a Nairobi hotel where he stays when in the capital city.
The pamphlet also states that he is housed in high class exclusive apartments which are paid allowance by the county government for his wives, children or brothers who travel by air.
The pamphlet describes Gachagua as a governor whose contracts and tenders in the county are his and supplies dialysis machines which are not in order as well as dental chairs which were all burnt.
Road engineers have resigned including the last one who never worked for more than two months in the county, according to the pamphlet.
It is alleged that Sh1.5 million collected during beatification of Italian Catholic nun sister Irene Nyatha through visitors and another Sh600,000 from hotels went into Gachagua’s account while half of it went to the county account.
The pamphlet claims that there will be a public meeting at Whispers Park on a date to be circulated with intention of redeeming the county from the corrupt officers as it was done with alcoholism following a presidential decree.