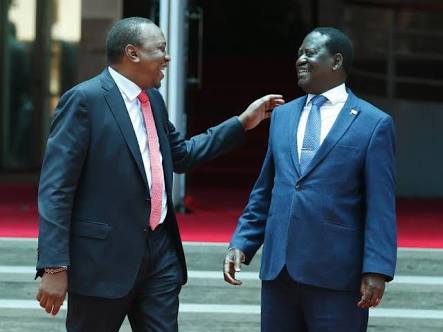 Over the last 5 years, our tribal differences have become distinctly pronounced, following the coordinated and deliberate posturing by Jubilee mandarins, covertly supported by the two tribal chieftains Uhuru Kenyatta and William Ruto.

Ethnic bigots like Moses Kuria were openly vomiting verbal outbursts, to the event that his community was God-ordained to remain in leadership. The man, obviously suffering from a mild bout of dementia, once rallied peasants from his poverty/hunger-stricken Gatundu back-yard, where poverty drips like droplets of water from melting ice.

Indeed, Kikuyu’s are historically easily whipped into ethnocentric frenzy, a tool used by their elites to use them as pawns in their quest to primitively-acquire wealth.

That Kikuyu’s are the dumbest community in Kenya is not in doubt. Last week’s events have thrown them off-balance, with many feeling betrayed or worse, disillusioned. They feel used like prostitutes after coitus, because someone whom they’ve been tooled to hate, is now shaking hands and hugging the very person who has spear-headed the hate campaign against him.

Then on the other side of Kenya, is the Kalenjin community, where their son was poised for automatic ascension to presidency in 2022. He had embarked on a rampage, damaging public coffers to line his pockets with enough financial capacity to run a presidential campaign.

Why should Kenyans be atleast relieved? Because any speed-bump we can have, to slow down the insatiable greed by Uhuru and Ruto, is a welcome development. Uhuru has been pre-occupied with getting the Northlands real-estate project off the ground, while Ruto has been acquiring Sentrim Hotels.

These are two individuals who would care less about our country.

Unlike them, Raila stands for something. His record over the years has spoken for itself. Quite different from Uhuru Ruto, who stand for nothing. They’re empty inside.

Now even if Raila just infused a small percentage of his principles and values in Government, it’s better than nothing. It’s better than having thieves spear-head the national agenda.

Imagine a place like the ODPP. It’s become one big shit-hole! And it needs a total overhaul. Not reform. It needs the right people heading/running it. Anyone recruited under the tutelage of the thief Keriako Tobiko, needs to be sacked, investigated and new staffers appointed. They need zero interference. Same as EACC. We don’t need to restructure it again and again.

Kenya has a brilliant constitution, good institutions but bad people running them.

For instance, why are Governors looting so much? Because none of the organs have been bold enough to arrest them. Like now, a bastard like Mwangi wa Iria should be behind bars. But if EACC officials are bribed to turn a blind eye, how will we achieve progress?

Wherever the pressure is coming from, be it the international community or a local sense of awakening should not be our concern. Kenya was headed to the dogs and one obvious sign was when they started appointing Class 6 drop-out as Cabinet Secretaries.

It is definitely Ruto who is barbaric enough to front such a ridiculous proposal, to appoint a Class 6 drop-out as CS. And Uhuru looked like someone held hostage. We needed a disruption from this buffoonery.

Too many careers are at stake when Raila is not the focal-point of a hate campaign. Bloggers, political “analysts” like Barrack Muluka, Mutahi Ngunyi were all caught off-guard by the latest developments. It’s time we stopped creating these bootleg careers and start creating real jobs for youth.

And clearly, Uhuru and Ruto were not going to achieve that, as they’re more concerned with their family businesses. They stole in 5 years, what all 3 of their predecessors stole since independence. Eurobond disappeared without a trace and speculation is rife that it will be used in developing the Northlands spectacle.

Members of the Kikuyu community have been blinded enough by their Kameme radio station, to believe that the Kenyatta family-empire is some sort of cooperative society, which will earn them dividends at the end of every financial year. And even after being programmed to hate Raila, they’re now being re-programmed to “love” him in light of the changing political landscape. The biggest guinea-pigs of our time.