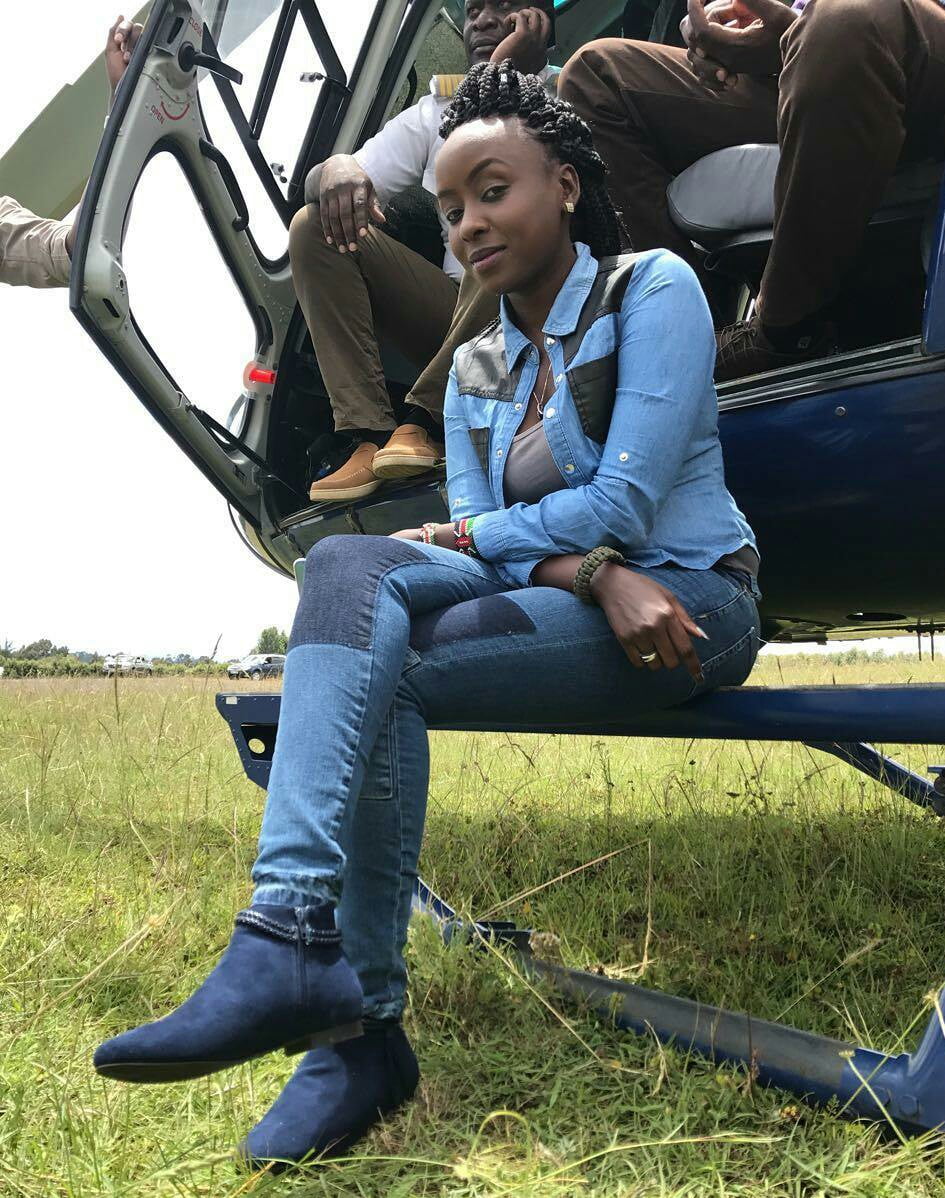 CAPTION: Jacquie Maribe pictured here with the late Captain Apollo Malowa. The chopper owned by Uhuru Kenyatta has been used to ferry slay-queens around the country, based on the photos we are seeing online. He’s the most useless President Kenya has ever seen.

As journalists who attended the Daystar University of stupidity concentrated on the Witnesser Challenge, posting silly photos of Kenyans, the main objective was to divert public attention from the bigger picture. Nobody wants to ask difficult questions and there seems to be an attempt by media and prominent personalities to quickly move on.

In the case of Captain Apollo Malowa, it’s oddly suspicious that an expert pilot who had worked for the military, in strong physical and mental-health, could crash the chopper in water out of the blues. That such a big aircraft could disintegrate completely after landing on a water body.

Because there was a time a chopper crashed in Mt. Kenya as it was taking off. The chopper had on-board CEO’s like former NMG boss Wilfred Kiboro, who were touring the Rhino Ark projects funded from CSR contributions through the media. The chopper crashed in full glare of camera’s, and on hard-ground, but nobody died. They all came out unscathed. 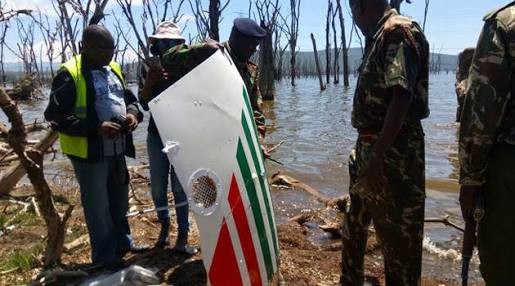 CAPTION: How did this chopper disintegrate into pieces? Why haven’t any other bodies been retrieved? Did it explode and others who sat at the windows, managed to jump out?

So why is this chopper disintegrating? Why can’t it be found? Where are the bodies? Did it explode? Had some managed to jump out before it completely blew up?

Did Jubilee want to murder pilot Apollo Malowa on the suspicion that he was leaking information to the opposition? Were the rest collateral damage? These are the questions nobody wants to ask. Everyone just wants us to “move on” as if that incident didn’t happen.

Jubilee mandarins are very paranoid which is what happens to despots who are desperate to cling to power. They view everyone with suspicion and the fact that Apollo Malowa still regarded Raila Odinga as “The People’s President”, the paranoid bastards in Jubilee might have wanted him dead. 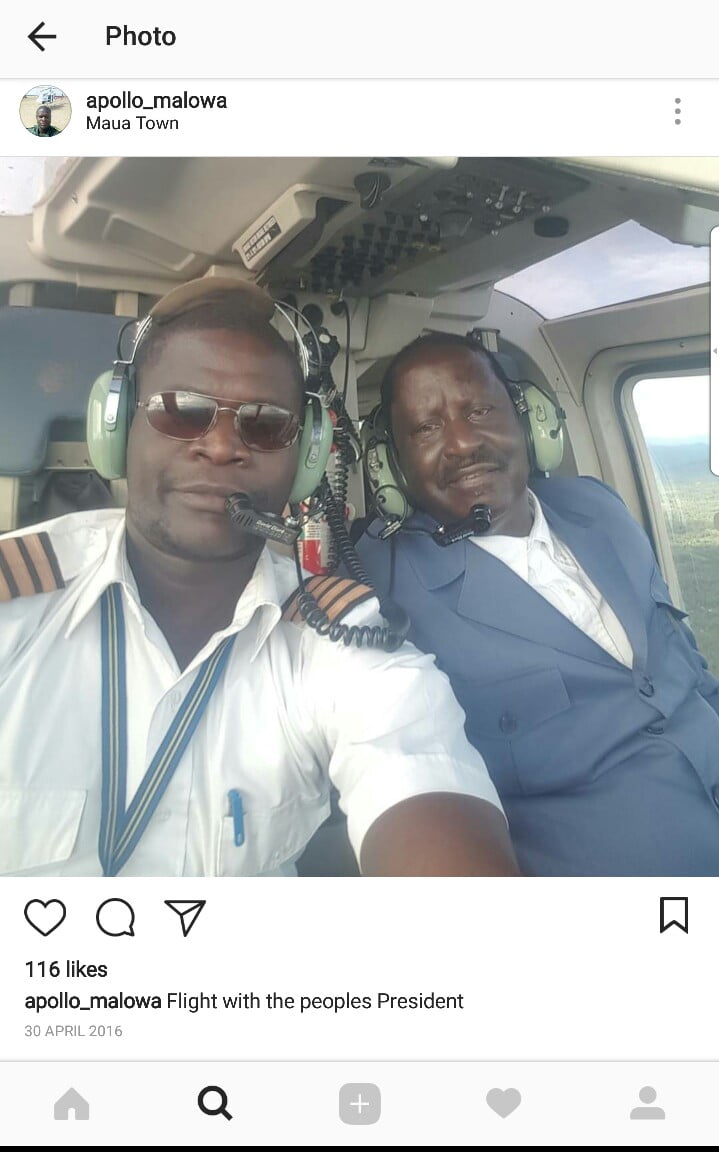 CAPTION: As late as last year, Captain Apollo Malowa still considered Raila Odinga as “The People’s President”. This was before he joined the company managing Uhuru’s chopper. Did his relation to the father of the nation create unease in the Jubilee camp?

Conflicting testimonies between the Police, the driver and the “witnesser” already should cast doubt on anyone with a functional brain. But majority of you who went through 8-4-4 are incapable of deductive reasoning because that curriculum was designed specifically to suppress that particular component of your brains.

The police said it was a tyre burst. A look at photos from all angles of that car show that it has no flat Tyre at all. Second to come was the driver. He said that he was evading a boda-boda rider and lost control. Well that would be believable if the car in question was a Probox or Mark X. But this is a Mercedes Benz goddamnit! That’s German technology right there. Those cars don’t swerve or lose control like that.

However on closer detail, you’ll notice that the right side of the passenger car has a dent. By the mere fact that onlookers had to break the door open means that the door had been hit by something and thus was proving difficult to swing open. Meaning that the car was hit from the right side by another bigger car, obviously not a motorbike. 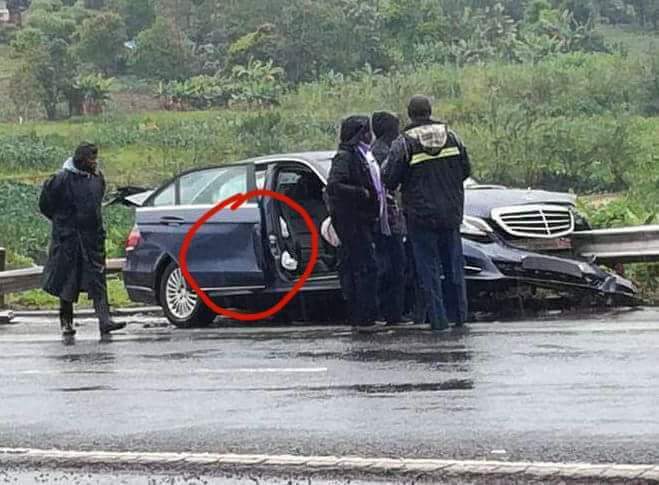 So why is Gakuru’s Driver lying? I will not concentrate on the witnesser too much because he was planted there to derail conversations with the aid of our state-controlled media. But my analysis are very basic, which any rational human can be able to detect without the aid of a translator.

From the same Facebook page that had leaked information about Wahome Gakuru’s love affairs and side-chics, came a WhatsApp conversation from a family member of a former Gubernatorial candidate and son to late fiery Nyeri politician Munene Kairo. In it, there seems to have been compelling discourse to the effect that Gakuru was rigged in. The bitterness in that message seem to be real, and while they submitted their fate to God, it’s clear that there might have been intense rigging activities in Nyeri and Gakuru was somehow 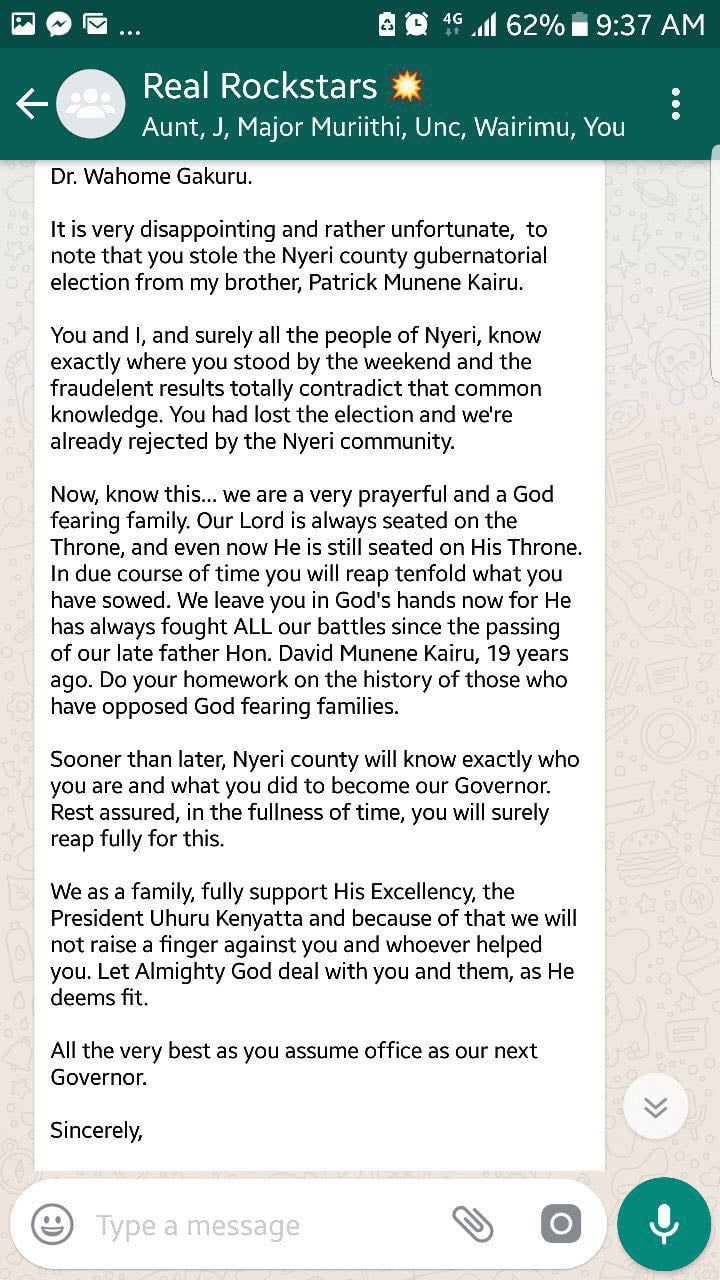 CAPTION: The seemingly truthful WhatsApp conversation, leaked to a popular forum on Nyeri politics that has since been deleted, is telling of the intrigues in that county. It seems that Gakuru rigged himself in. It’s probably the same machinations which saw Uhuru’s numbers inflated during the sham 26th October elections.

The inflated numbers in the October 26th Sham elections where regions like Nyeri recorded slightly “higher” turnout more than August 8th, yet physically we saw less people on the queues, could be a hint.

Could Gakuru have been eliminated probably because he was an accessory or witness to something? Was he sloppy in his attempt to inflate Jubilee numbers? Because we saw the video where Alice Wahome the MP of Kandara was manhandling the Returning Officer Malonza. In the audio, she was categorical that she might face unspecified consequences if the results didn’t reflect the political interests at the time.

Was Alice Wahome expressing real fear of assassination if she didn’t comply with orders from above? Is this perhaps why Wahome Gakuru was murdered?

It’s all very fishy. If we had journalists instead of socialites, or sympathy-solicitors like Francis Gachuri, we’d be having clues being pieced together by now. But Daystar and 8-4-4 really messed today’s journalists which is why we call on Kenyans to stop watching news bulletins. They’re all rigged to favour the status-quo. 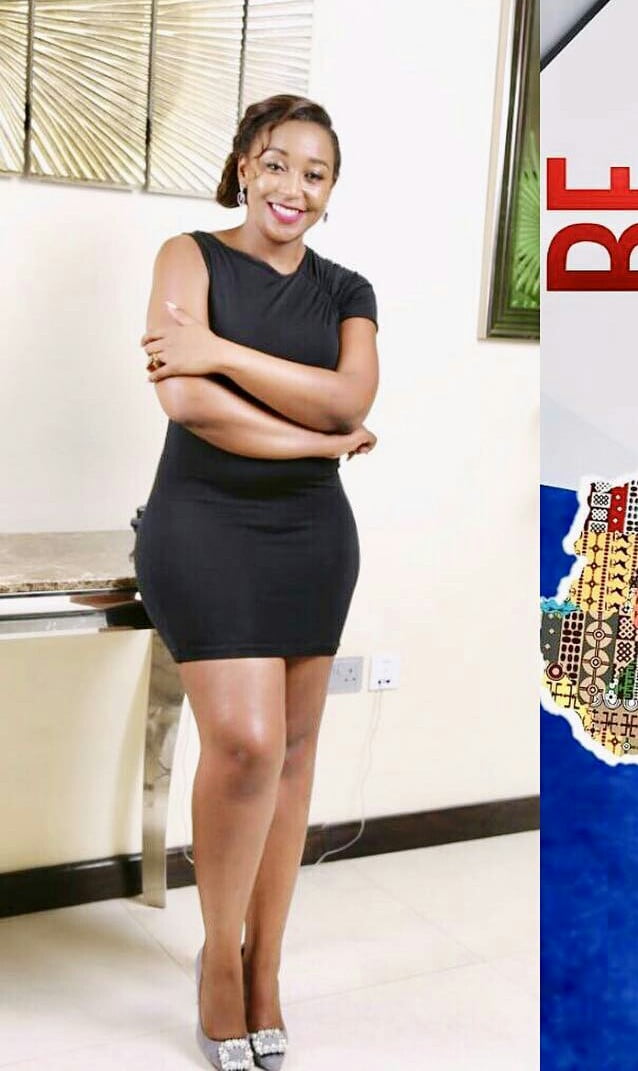 CAPTION: We’d appreciate if journalists were fucking our minds with an outpouring of investigative pieces, and not their bodies.
Do you like out investigative pieces? Would you like to see more? Help keep us working donate with your ordinary Visa, Mastercard, etc on the link below using PayPal. All donations are highly appreciated.
https://mobile.paypal.com/is/cgi-bin/webscr?cmd=_express-checkout-mobile&useraction=commit&token=EC-6AM05524NV993322T#m
Would you like to get published on this Popular Blog? You can now email Cyprian Nyakundi any breaking news, Exposes, story ideas, human interest articles or interesting videos on: [email protected] Videos and pictures can be sent to +254 710 280 973 on WhatsApp, Signal and Telegram.