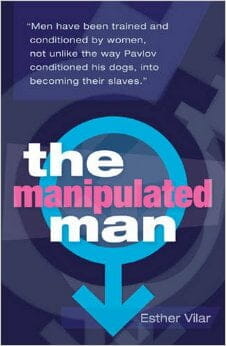 Today we launch the Cyprian Nyakundi Book Club where we will seek to promote the reading culture amongst Kenyans. I was inspired by a story on “Mashable” where a train service in Romania offers free train-rides to anyone that reads a book.

Today’s picking is Argentinian author Esther Vilar’s book “The Manipulated Man” showing how women have twisted feminism for their own gain. Read this review by Roosh. Many of you pussy-whipped brothers out there are victims of feminism and manipulation. Those of you negro’s that listen to Drake songs, or sing Adele’s music are the disgraceful lot that I hope to reach with this book.

We severally asked President Uhuru Kenyatta to save himself and severe links with Anne Waiguru, but he constantly defended her, until a point where he had to publicly deny that she was not his girlfriend. Was he a victim of this toxic feminism? Is Kenya a nation of pussy-whipped brothers because The President is a Manipulated Man?

Could it be that strength, intelligence, and imagination are not prerequisites for power but merely qualifications for slavery? Could it be that the world is not being ruled by experts but by beings who are not fit for anything else—by women?”

Esther Vilar argues that the freedom men think they have in selecting a wife and being head of the household is actually slavery, and that working the same job for forty years to support a woman is no different than a child repeatedly playing the same board game. The Manipulated Man is one of those books that reframes your world view, making you question what value women offer besides their vaginas.

While men pick a career and work 40 years nonstop because they have to, today’s woman treats her career more as a temporary adventure. She’s ultra-serious about it in her 20s but then tosses it overboard for children upon landing a successful husband. I find that Vilar nails the more traditional societies which still exist today in Eastern Europe, particularly Ukraine, and how those crafty women enslave a man through marriage in exchange for popping out a kid and doing a couple hours of housework per day. Keep in mind this book written in the early 70s and referred to a time when the nuclear family was still intact, so she did not predict the degree that Western women would soon enslave themselves in the rat race.

“Theoretically it is possible for a beautiful woman to have less intelligence than a chimpanzee and still be considered an acceptable member of society.”

Vilar argues that for all the liberation that men have given women through inventions like the washing machine and dishwasher, they still choose to spend free time on entertainment over intellectual pursuits. They have no interest in challenging their brains like men voluntarily do. She defines men as animals who work, nothing more. Men work for all their lives while women only work if they have to (if they are ugly or unable to find a husband). In other words, the sign of a damaged or low quality woman is one who doesn’t have the choice to stop working.

“Women’s proven lack of imagination makes clear that they have no a priori need for new inventions. If they did, they would invent things more often themselves.”

For a while now I’ve come to the belief that men need to lead the household and provide for their family to be happy and feel like a man. I want to be proud of being able to take care of a wife and kids. Vilar argues that this pride is no different than a donkey feeling strong as it carries a heavy load.

If the American-style 21st century marriage isn’t working, and the traditional provider marriage exploits men, what should men do? Unfortunately this book doesn’t provide answers, and you start to get the feeling that marriage in all forms is a bad deal for men. Any long-term pact you make with a woman must be carefully weighed. You must ask yourself if you are getting a good return for your labor and time in exchange for vaginal access and a possible heir.

There are a couple things in the book that I disagree with. First, she argues that masculinity and femininity are environmental constructions, sort of like how your typical feminist views gender roles. She thinks there is no genetic component to maleness or femaleness, which can be easily refuted by looking at examples in the animal world. Second, the male archetype she uses in the book is a typical beta male, who is extorted by women without—in many cases—even getting sex in return. One benefit of being a player today is getting low-effort pussy where you get more than you put in. I may be a slave to the pussy but if I’m able to get a constant supply of it and the accompanying sexual pleasure while putting in decreasing amounts of work, is that not a fair deal?

“For man, who was brought up to be proud and honorable, every working day is merely an endless series of humiliations. He shows enthusiasm for products he finds useless, he laughs at jokes he finds tasteless, he expresses opinions which are not his own. Not for a moment is he allowed to forget that the merest oversight may mean demotion, that one slip of the tongue may spell the end of his career.”

I’ve never had a book that made me reconsider so many of my beliefs like this one. It ended up being the most vicious takedown of the female gender that I’ve ever read, five times harsher than anything I’ve written. My mind was buzzing while reading, hungry for a fresh take on the male-female issue. If you still have the problem of respecting women, this book will fix you right up. Not only will you avoid getting entrapped by a woman, but you’ll have a better understanding of what causes their seemingly irrational behavior. Highly recommended.